As its hottest convertible yet, the drop-top MINI JCW is great fun, but the stiff ride on UK roads shows up flaws 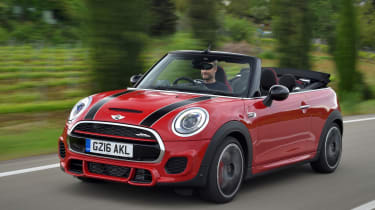 MINI’s fastest convertible ever delivers all the performance, fun and drama you’d expect. On the right road it’s an enjoyable drive, plus it sounds great with the roof down. British tarmac exposes the car’s stiff ride and increased body flex, however, so the enthusiasts who buy these things are better served with the hatchback. They’ll save a healthy chunk of cash on an already pricey car by doing so, too.

MINI’s spiciest models haven’t always been as convincing with the roof lopped-off as they are in hatchback form; the powerful engine often wrote cheques that the wobblier chassis couldn’t cash. But the latest Convertible (in base Cooper form at least) seems stiffer and better to drive than ever. Is the most hardcore John Cooper Works version as convincing?

Styling-wise there’s no mistaking it for a lesser MINI. The muscular bumpers and deep air intakes, red detailing and unique black and silver alloys state the racy intent nicely without overdoing it. Inside, you’ll find the same figure-hugging sports seats, JCW branding and two-tone dash as the hatch. If all that hasn’t got you noticed by passers-by, then the sports exhaust will as it emits a throaty burble at start-up.

That exhaust, and the pace that accompanies it, becomes the dominant theme of the JCW’s driving experience. With 228bhp on tap it’s one of the most powerful small cars around, bettering the already quick Cooper S by 39bhp. It fires through the rev range with real gusto, picking up from around 1,500rpm and only tailing off near the redline. All the while the exhaust parps and bangs whether the car is in ‘mid’ mode or the (artificially) louder ‘sport’ mode to make accelerating a real event. It’s even louder with the roof down, too.

It’s worth noting, however, that it’s nearly 100kg heavier than the JCW hatch thanks to additional chassis strengthening. It’s three-tenths slower to 62mph – and while the droptop certainly feels fast in isolation, driven back-to-back with the hardtop it doesn’t seem quite as urgent from a standstill. Aiding the feeling of speed, however, is the six-speed manual gearbox, which is slick to use and features handy rev-matching on downshifts. The auto box, while quick shifting and actually faster on paper, dilutes the sense of speed so it’s best avoided. 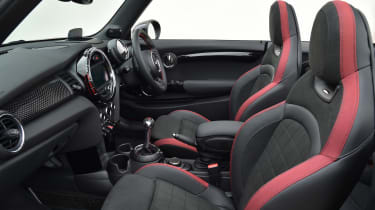 The JCW Convertible does – thankfully – retain most of the hatchback’s handling ability. Turn-in is sharp thanks to the direct and weighty steering, grip levels are decent and body roll is kept firmly at bay. Over smooth, flowing roads, you’d be hard pressed to tell it apart from the hardtop. Over some particularly rutted tarmac around Oxfordshire, however, the comparative lack of body strength – combined with the stiff suspension – made itself known. The window frame and body shimmies noticeably with the roof down, and with it up you can hear clangs and rattles from the roof mechanism.

Furthermore, the ride might be a bit too much for those not always driving it on the edge. It’s softer than previous MINI JCWs, but it’s still sharp and unforgiving on really bad road surfaces, in contrast to the firm but well-controlled Cooper S Convertible. The hatchback is equally stiffly sprung, but the rigid body deals with potholes with more aplomb.

Still, unlike the even wobblier DS3 Cabrio Racing, it is at least a proper convertible. As usual it’s blustery with the roof down at speed, although the optional wind deflector will reduce the impact. The roof itself insulates well from road noise, folds quickly and quietly onto the rear deck, and even allows a decent amount of headroom in the back. Legroom is tighter than in the hatch, though, so adults won’t be all that happy back there. The cabin itself is typically well-made and nicely detailed, as it should be for the price. 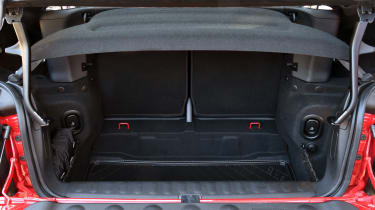 At £26,635, the JCW Convertible is a full £3,500 more than the already premium-priced hatch. Explore MINI’s extensive options list (which even includes a union jack fabric roof) and that’ll quickly jump to £30k. Our fully-loaded test car was nearly £35,000, which is an awful lot considering the already fun Cooper is just over £18k.