With its bold looks and frugal petrol engine range, Mitsubishi's new Colt has a serious point to prove. Charged with reinventing the Japanese company's image across Europe, it joins the popular L200 pick-up, Shogun 4x4 and legendary Evo VIII in UK showrooms this September. 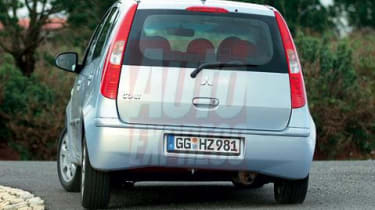 With a funky look and a roomy cabin, Mitsubishi's new baby has plenty of potential. Its handling and wide engine range also impress. Prices are yet to be revealed, but it will be cheaper than the Smart ForFour with which it shares so much, ensuring it will be a real contender in the supermini class.

With its bold looks and frugal petrol engine range, Mitsubishi's new Colt has a serious point to prove. Charged with reinventing the Japanese company's image across Europe, it joins the popular L200 pick-up, Shogun 4x4 and legendary Evo VIII in UK showrooms this September.

The large, steeply raked windscreen and prominent A-pillars give a hint of the Ford Focus C-MAX about the front-end styling. There are also touches of Peugeot's 206, and the new 307. No surprise when you learn the man in charge of the look, Olivier Boulay, was poached from the French company.

However, it's not all about outside influences. In common with the sporty Evo VIII, the prominent shaped grille proudly shows off the Mitsubishi logo. Arrow-shaped indicator repeaters and slim tail-lights are also nice touches, but it's on the inside that the newcomer attracts the most attention.

With impressive amounts of head and legroom, the cabin is airy and modern. Built from good quality materials and featuring translucent plastic knobs, it enjoys a fresh, funky look. There's even a plastic strip running between the centre console and transmission tunnel that lights at night to give a warming, trendy feel to the interior. To add practicality to the package, the 60/40 split rear seats can be reclined, folded, tumbled or removed. Initially, there's a choice of three petrol engines - all built in Germany and shared with the new Smart ForFour - and it's the entry-level three-cylinder 1.1-litre that's the pick of the bunch.

Free-revving and sweet sounding, it gives plenty of power despite its size. Both the 1.3 and 1.5-litre four-cylinder units are not quite as refined, but the latter provides strong performance, and all models get a slick five-speed gearbox. The Colt is lively in corners, too, with lots of grip and a sharp turn-in ensuring it's fun and easy to drive.

However, the ride quality was a little harsh in the early examples we drove, and the electric power-steering needs fine tuning to give more feedback.

All the variants come equipped with anti-lock brakes, driver and passenger airbags, and the option of a six-speed automated manual transmission.

It all adds up to a decent package, but if you are on a limited budget, we would recommend sticking with the car's three-cylinder powerplant, which is every inch a thoroughbred.