With its mighty Lancer Evo established in motoring folklore, Mitsubishi's latest addition to the Colt stable has a reputation to live up to. Auto Express rates the Japanese firm's supermini in basic form, so we expected great things from the new turbocharged CZT when we were given the chance to test it. 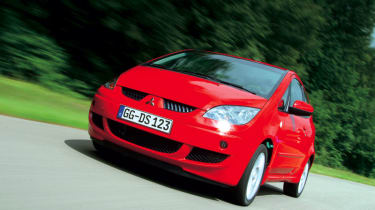 In CZT form, the three-door Colt isn't the fire-breathing rally refugee that enthusiasts might have hoped for. As a budget hot hatch though, the styling and price hit the mark, while the cheaper 1.3-litre CZ3 should represent good value for money for drivers in less of a hurry.

Before setting foot in the new car, it's worth pointing out it is like no other Colt we've seen. And that's not just down to its more powerful turbo engine, but also because the new model is based on the attractive three-door CZ3. The new model will be available early next year, and there's a good reason why we've been made to wait for so long. Rather than simply lop off a couple of doors, engineers at Mitsubishi's design centre in Germany have given the super- mini a sportier look. As a result, only the five-door's bonnet and front bumper are carried over unchanged to the CZ3, and the three-door's roofline is 30mm lower than that of its sibling.

The changes are largely successful and the new rear and short overhangs undoubtedly improve on the five-door's upright stance. The turbocharged CZT has a few extra features that hint at its 150bhp performance, including unique front and rear spoilers and stylish 16-inch alloy wheels which offer it a purposeful look. Inside, there's aluminium pedals and a handsome leather steering wheel and gearknob.

From behind the wheel, the sports seats and white, chrome-rimmed instruments reinforce the sporty theme, while the 0-62mph time of eight seconds is competitive. It shades the slightly less powerful Peugeot 206 GTi - so long the standard-bearer in this class - but the Colt doesn't feel as urgent as a 150bhp supermini should.

Those expecting Lancer Evo levels of performance will be disappointed, because the torquey engine is no screamer, and rev-happy drivers may prefer the less powerful 1.3-litre version. That model is expected to account for the majority of CZ3 sales, and will also be available with Mitsubishi's Allshift automated manual. Our CZT wasn't fitted with the final UK suspension settings, but early indications point to a firm ride and tidy handling. However, it's worth remembering this is a £13,000 hatchback aimed squarely at younger enthusiasts. As a well equipped and competitively priced hot hatch, it's a strong contender. Final specifications were still to be confirmed when we drove the car, but expect ESP and traction control as standard.

Those of a more practical mind will appreciate the sliding back seat and standard climate control. Rear space is also pretty decent, because the CZT shares the five-door's wheelbase, despite being 60mm shorter overall.

Up front, the windscreen pillars cause sizeable blind spots on either side - the five-door is similarly afflicted - while the sweeping C-pillar and small rear side windows restrict over-the-shoulder visibility. But that's more of an obstacle for buyers of the smaller-engined versions. For CZT customers, the lure of a Mitsubishi turbo will be everything.