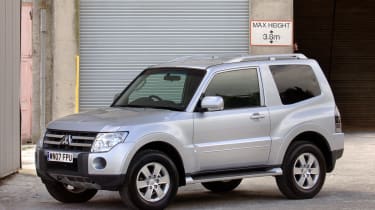 There has been a commercial version of the Mitsubishi Shogun around for years, until recently known as the Shogun 4Work.

Nowadays, Mitsubishi has dropped the 4Work name, and instead badges the Shogun Commercial in line with its regular SUV versions. That means you can have a short-wheelbase Shogun van in entry-level SG2, or more luxurious and eye-catching Warrior or Barbarian trims, while the long-wheelbase van is offered only in the bottom SG2 spec.

Not that SG2 trim feels especially basic as you get loads of kit thrown in. It's one of the key benefits of driving a passenger car-derived Commercial for work. More expensive Warrior and Barbarian trims take things to another level, with the sort of kit-bag you expect not in a workhorse, but a luxury SUV.

Mitsubishi has been removing the rear seats and rear side windows from its Shogun 4x4 for many years, creating a highly capable all-wheel-drive light-commercial van in both three-door short wheelbase and five-door long wheelbase versions. However, while the Shogun commercial offers real all-terrain ability, it's an expensive way to move materials around.

There are less expensive 4x4 vans on the market, such as the Volkswagen Transporter 4Motion, that offer considerably more carrying capacity and load volume, while a 4x4 pick-up, such as the Ford Ranger will carry more than 1 tonne and provide a similar driving experience.

Where the Shogun excels is as a towing vehicle, with shorter models capable of pulling a 3,000kg trailer and the LWB commercial having a 3,500kg towing capacity, the same as the Land Rover Defender and the latest Ford Ranger pick-up.

All Shogun models use a 3.2-litre four-cylinder diesel engine delivering 197bhp and a sturdy 441Nm of torque. Mitsubishi claims a combined economy figure of up to 36.2mpg for a SWB manual Shogun, dropping to 33.2mpg in a LWB model with automatic transmission. CO2 emissions range from 207g/km to 224g/km.

These are reasonably impressive figures for such a heavy vehicle, the 3.2-litre Ranger pick-up promises to return only 29.1mpg and emit no more than 265g/km for an automatic transmission model, while the V6 Navara returns 29.7mpg and emits 250g/km.

Shogun owners will need to visit the dealer every 12,500 miles or once a year and Mitsubishi offers a reassuring three-year/100,000-mile warranty on the vehicle. 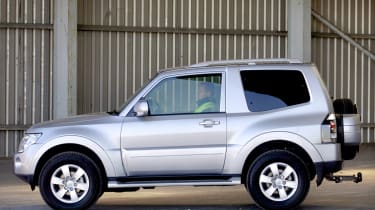 You also get the benefit of the SUV's standard security equipment, which includes a Thatcham Category 1 alarm and smart keyless entry on all Shogun Commercial models.

Mitsubishi follows a familiar pattern with the commercial versions of the Shogun, removing the rear seats and rear side windows, installing a flat load floor behind the front seats. Shogun provides a reasonably large load volume, up to 2.2 cubic metres in the LWB model, with payloads up to 765kg. However, a dedicated all-wheel drive van, such as the VW Transporter 4Motion delivers a far more useful 6.7 cubic metres of volume, with the ability to carry more than 1,000kg of load. 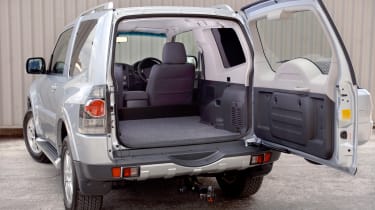 Similarly a 4x4 pick-up, such as the Nissan Navara, can carry in excess of 1,000kg, and the open pick-up bed delivers a much larger load area. If you require a lockable load space, then there are plenty of pick-up backs that provide a fully enclosed secure space. Though offering less in the way of load-carrying ability, the choice of a SWB Shogun does provide a more manoeuvrable van for those who don’t require ultimate load-carrying capacity.

The SWB does give away a little bit of practicality to the longer models, but it can still tow a 3,000kg trailer, while the LWB Shogun can handle a 3,500kg trailer. That puts the Shogun on a par with the market leaders in the towing sector, the Ford Ranger and the Land Rover Defender. The combination of all-day cab comfort and all-weather carrying ability has made the Shogun a popular choice with the Highways Agency and many police forces around the UK. Shogun is also a major player in the construction and agricultural markets, where its robust build and towing capacity make it a popular choice.

A quick search of the Internet reveals plenty of happy Shogun owners, with the big Mitsubishi showing strong reliability and durability. Being based on a car, it's not surprising to see that all Shogun models have multi-mode ABS brakes with electronic brakeforce distribution (EBD).

The 4x4 also comes with Mitsubishi Active Stability and Traction Control (M-ASTC), which maintains maximum traction both on and off-road. Of course, in the event that things get slippery, you can change from two to four-wheel drive at speeds up to 62mph, and the all-wheel drive system can be used on the road in adverse weather or when towing to aid stability. Inside the cab there are twin front and side airbags for the driver and passenger.

With almost 200bhp on tap from its 3.2-litre engine, there's always plenty of power to spare in the Shogun, making it an ideal towing companion.  Manual and automatic transmissions are available, both having five forward gears. The automatic is the nicer of the two to use and, in car form, by far the most popular option. 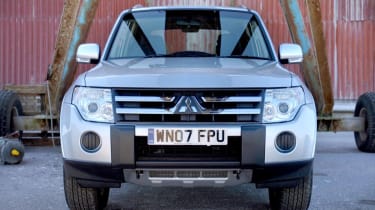 Even in short-wheelbase form, the Shogun is a big vehicle that takes some manoeuvring in town. However, it's no larger than more recent additions to the pick-up market, such as the Ford Ranger and the VW Amarok, though it does require a bit of space to move around. You sit high and get a commanding view of the road ahead, the downside being that there's quite a bit of roll through corners and the handling can be fairly vague. The brakes are strong, though, and the multi-link rear suspension soaks up bumps far better than an unladen pick-up’s leaf springs.

The Shogun 4Work is based on an expensive SUV, and this shows in the cab. Even in basic  trim, the Shogun comes with climate control, a six-speaker stereo system, 18-inch alloys, twin front and side airbags, electric windows, heated electric door mirrors, heated seats, cruise control, and a leather-covered steering wheel. 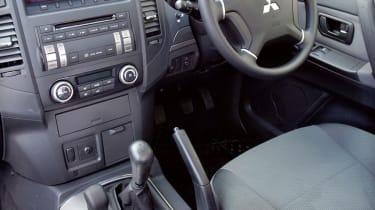 Opt for the Warrior specification and you add leather for the seats, front fog lamps, a Bluetooth phone kit, a reversing camera, tailgate privacy glass and a touchscreen sat-nav system. There are various load area mats and linings available, plus you can order roof bars and a tow bar to add to the 4x4’s versatility, but to be honest the Shogun wants for very little in the cab.