The Shogun isn't driving technology forward but it's a dependable, no-nonsense vehicle 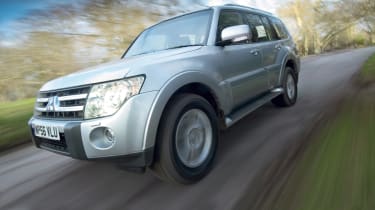 As it enters its second quarter of a century in production, the Shogun is in reasonable shape. Despite underpinnings that lag behind technology-packed rivals, the chunky off-roader continues to impress. Its ride, refinement and flexibility offer an honest and no-nonsense approach in the face of lifestyle-branded competitors. However, in this range-topping spec, it makes little sense – we would choose a cheaper, entry-level model.

There was a time when fashionable 4x4 drivers wanted only one thing... the Mitsubishi Shogun was among the few upmarket offerings in what is now a highly competitive market sector.

But 25 years after its launch, a lot has changed. The car faces more soph-isticated competition from the likes of Land Rover and BMW, and unsurprisingly its sales have suffered.

Undeterred, Mitsubishi reckons this top-of-the-range LWB Elegance model is the car to put things back on track.

There’s a new look inside and out, and the cabin features a fresh dash. The neat trip computer incorporates a compass, altimeter and barometer, but there are also some cheap plastics, although it’s all well screwed together.

Driver and passenger seats are comfortable, and offer lots of space, but the fold-down rear chairs are narrow, thinly padded and best for short journeys only. The four-cylinder DI-D diesel is noisy at idle, but more refined once settled at cruising speed. The torquey unit works well with the five-ratio auto box to give decent pace.

Mitsubishi has stiffened the chassis and suspension, and while it lacks the complex electronic-controlled springs and dampers of some rivals, the Shogun still impresses. On-road, surface imperfections are well filtered out by the ride, and there’s less roll in corners. The steering remains lifeless and vague, but on-tarmac ability is improved. Off-road, the Shogun is still unstoppable.

But is this enough to keep the car ahead of rivals? We’re not convinced. Even though this flagship is tipped to be the top seller – with around 65 per cent of sales – we think its £32,999 price is high, particularly alongside the Land Rover Discovery and BMW X5.

Engineers have clearly performed miracles, refining the car’s road manners. But the Shogun is not the luxury offering it is obviously trying to be.