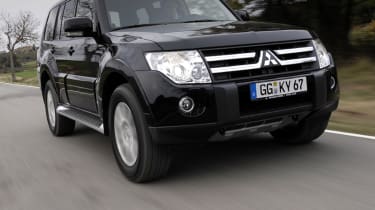 The badge has been around for 25 years, but this is the best Shogun yet. Big steps have been made in on-road handling, cabin quality and comfort, but the Mitsubishi suffers from a gruff engine that offers only adequate performance. It is an off-roader first and foremost, and certainly can’t match the all-round abilities of Land Rover’s Discovery. But if you like your 4x4 to be honest, rugged and versatile, then the Shogun will still fit the bill.

It's not so long ago that the Mitsubishi Shogun had the world at its feet. It wasn’t just the UK’s first choice when it came to offering rugged practicality – it was the only one. But these days, the fourth-generation machine lags behind more modern rivals in terms of all-round talents. So, in the face of this competition, the Shogun has been revised – but will it shoot to the top of the class?

It goes on sale in March, with prices ranging from £22,949 to £34,999. That means the fresh Mitsubishi has buyers interested in the Nissan Pathfinder and Toyota Land Cruiser firmly in its sights.

Outside, the changes are subtle, and apart from the restyled headlights, you would be hard pressed to tell the newcomer from the outgoing car. Whether as a long-wheelbase five-door or shorter three-door, it’s unmistakably a Shogun. Climb into the cabin, though, and it’s clear there’s been an effort to improve quality. The plastics are upgraded, and the switches have a precise, mechanical feel. What’s more, integrated into the dash of top-spec models is a sat-nav system with a 30GB hard drive – one of the first of its kind.

As with its predecessor, the revised Shogun’s space and visibility are excellent. Larger variants have the option of an extra two seats which form a third row that folds into the floor.

Under the bonnet sits a cleaner and more economical version of Mitsubishi’s 3.2-litre DI-D diesel. The maker claims improved refinement, although the unit remains quite rough and vocal.

The car can struggle on long motorway inclines, while the automatic transmission hunts between fourth and fifth gears. Opt for the manual, and you will get more control, but the shift action is notchy and heavy. Overall refinement is good, although wind noise around the screen is noticeable, as is the drone from the diesel powerplant.

As well as working on the engine, Mitsubishi has modified the chassis to give better on-road manners. With a stiffer body and uprated springs and dampers, the big 4x4 now rolls less in bends. Even when cornering at speed, the car remains composed. With precise, if lifeless, steering, it’s now a competent tarmac performer.

What’s more, the ride is good, ironing out the worst of the potholes. However, the Shogun is really in its element over rough terrain. Mitsubishi wants to maintain its 4x4 as an authentic mud-plugger, and it shows. No matter what the surface or obstacle, the car clambers effortlessly onwards. With a four-wheel-drive system that includes traction aids and hill descent control, it can even per-form these feats on normal road tyres.

It may not be the most modern off-roader around, but the Shogun looks cleaner and is still a strong 4x4.