The toughness of a Land Rover Defender, luxury of a Range Rover and prices that undercut both. Meet the Mitsubishi's Shogun 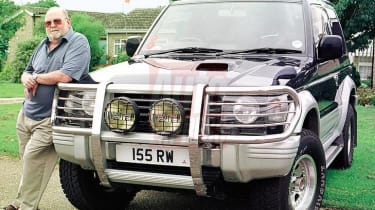 If you want the toughness of a Land Rover Defender, the luxury of a Range Rover and prices that undercut both, then take a closer look at Mitsubishi's Shogun. The long-running 4x4 can trace its roots back to the early Eighties, but by far the most common second-hand buys are those built since 1991. Early 2.5 and 2.8-litre turbodiesels are rough and ready, but make good workhorses, while 3.0 and 3.5 V6 petrols are refined, yet costly to run. The 3.2 TD DI-D, launched in March 2000, is the most refined oil-burner - it's quicker and more economical than the V6, too - but is in big demand. Residual values are strong because respected 4x4s are always popular, but not all Shoguns make good buys. These cars are often used for towing and off-roading, so careful inspection is recommended before making any purchase. There is also quite a number of grey-import Pajero versions on British roads. While these can provide decent value, they differ from UK spec and aren't worth as much.Checklist * Off-road ability means many Shoguns are worked hard, so check carefully for underbody damage. * Problems with the transfer 'box have been reported on older cars. With the vehicle stationary, check that the selector lever engages both ratios. * Well used Shoguns suffer suspension wear. On high-milers, have the springs checked by an expert. * Pre-2000 diesels can have injector problems which are pricey to fix. The biggest tell-tale is a cloud of thick, black smoke under acceleration.Glass's View As with all 4x4s, the Shogun holds its value well and the bubble has yet to burst, according to Glass's Consumer Values. Diesel engines and seven-seater interiors are particularly desirable selling points, but even petrol-engined three-doors are popular. Be wary of Pajeros dressed up as UK cars, however, and remember that these imports are worth 10 to 20 per cent less than British models.My Shogun... When Ray Waller from Thetford, Norfolk, was considering a 4x4 to tow his caravan, he wanted something appealing to the eye which was also comfortable, reliable and safe. He bought his first Mitsubishi Shogun in 1999 and immediately fell in love with the off-roader. Now he owns a 1994 Pajero 2.8TD grey import that he bought in May. "It's just what I need," says Ray, 68. "I particularly like the looks, comfortable seats and the high driving position for clear visibility - not to mention the ride and driving characteristics, which are excellent for a 4x4." Ray says his next car will definitely be an another Shogun: "There is no question about it - although it does 25mpg and isn't as economical as I'd like, it's still my favourite vehicle and I can't think of anything more suited to my needs." Such is his enthusiasm for the Shogun that Ray is the founder member of the now 1,000-strong Mitsubishi Shogun and Pajero Owners' Club (www.pajeroshogun.org.uk) which has regular shows and off-road events.

The best Shogun by far is the 3.2 DI-D from 2000 on, which offers the most refinement, performance and fuel efficiency. Despite being a touch unrefined, 2.8-litre diesels are strong workers and can return more than 30mpg, while the five-doors are ideal for families, making them the best choice for running costs and resale values. If you can swallow the fuel bills, however, the automatic 3.5 V6 is a refined, relaxing and comfortable cruiser.