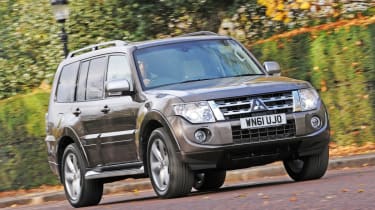 The changes to the Shogun are subtle, but Mitsubishi’s bulletproof off-roader has always had a loyal following and these updates will keep sales going strong. But while many of its SUV rivals are becoming less and less compromised on the road, the Shogun still feels cumbersome and in need of more extensive changes. Thankfully, the car’s excellent go-anywhere ability remains, and buyers will be happy to know that you won’t find this level of equipment anywhere else in this price bracket. For that reason, you can forgive the revised Shogun a few of its shortcomings.

The Mitsubishi Shogun is known for being a no-nonsense, bulletproof off-roader, but these days even the most dedicated mud-pluggers have to conform to the latest emissions regulations, and the Shogun is no exception.
For 2012, Mitsubishi has tweaked the model’s 3.2-litre diesel engine, so it now passes strict Euro V standards. It still produces 197bhp, and in the automatic, five-door LWB we tested, it will return 33.2mpg and emit 224g/km of CO2.
Styling changes are subtle, too, and include a new chrome grille plus 12-spoke, 18-inch alloys.

Inside, Mitsubishi has tweaked the dials and improved some of the materials and upholstery.
There’s no change to how the Shogun drives, but that’s a mixed blessing. On the one hand, the engine is reasonably refined and provides enough power to launch the 2,300kg car from 0-62mph in only 11.1 seconds. The slick five-speed automatic does a great job of changing gears, too.
But we wish Mitsubishi’s engineers had made a few tweaks to the steering and ride. You expect a high-up off-roader like this to be able to soak up potholes, but hitting one tends to send a thud through the cabin.
Also, the steering is a little vague and slow to react. It all makes the Shogun feel more cumbersome and unwieldy than it really should.
While the on-road dynamics may not quite be up to scratch, there’s no doubting this car’s legendary off-road ability. With a locking rear-differential and high or low-ratio gearbox, there’s not much that could stop your progress, wherever you go.
We tested the range-topping SG4 model. It costs £40,999 but features full leather upholstery, heated seats, DVD screens in the headrests and a reversing camera. You won’t find that level of equipment at that price tag anywhere else, but it’s worth noting that you could buy an entry-level Land Rover Discovery 4 or a well equipped Toyota Land Cruiser for similar money. Both are better to drive on-road.
Share this on TwitterShare this on FacebookEmail