Does classic 4x4’s cleaner, greener image detract from its tough character? We find out 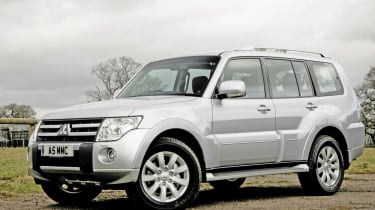 Few cars have as loyal a following as the Shogun – and rightly so. It’s always been dependable and highly capable. This latest version is the best yet, because as well as being hugely flexible, with serious off-road ability and epic levels of kit, it’s economical and surprisingly CO2-friendly. The performance boost is the icing on the cake. While the badge is still unlikely to appeal to BMW X5 lovers, for buyers after a proper off-roader that doesn’t cost the earth to run, it’s well worth a look.

It's all change at Mitsubishi. Depending on your point of view, the Japanese brand has always stood for one of two things – high- performance rally-derived super saloons or hewn-from-granite, hard-working 4x4s. But these days, the company wants to be eco-friendly – so it’s doing its best to cut emissions across the range.

Thanks to a heavily revised 3.2-litre diesel engine, this latest Shogun shows the way forward – it’s much greener and cheaper to run. But have the changes compromised performance?

First, let’s look at how much more efficient the big seven-seater has become. Changes to the engine include a lower idle speed and new alternator, while there’s tweaked differential gearing and the overall ride height has dropped 15mm at the front and 10mm at the rear to provide better aerodynamics. As a result, CO2 emissions have fallen from 280g/km to 224g/km for the five-speed automatic we tested – and crucially that means the Shogun will save owners £400 in road tax. Register one this month and you’ll still be hit by a £550 first-year ‘showroom tax’, but the old model would have been burdened by a £950 bill.

As for the manual transmission version, it’s even cleaner, dropping from 246g/km to 212g/km. Of its competitors, only the BMW X5 emits less CO2. The Shogun’s claimed 33.2mpg combined economy is up drastically from 26.7mpg, making it one of the most frugal large 4x4s you can buy.

Surely these gains have come at the expense of performance? Actually, no. Mitsubishi’s engineers have managed to boost power significantly from 168bhp to 197bhp, while torque rises from 373Nm to 441Nm.

This means the maximum towing weight shoots up 200kg to 3,500kg and the 0-62mph sprint tumbles from 12.9 seconds to 11.1. On the move the Shogun displays decent pace, and while a 2,300kg kerbweight means it’s never going to beat hot hatches off the line, all that torque hooked up to a responsive and slick auto gives the 4x4 strong overtaking urge and allows it to cruise happily at high speed on the motorway.

The engine isn’t whisper-quiet but it is reasonably refined. Teamed with a comfortable ride this makes the Shogun a relaxing place in which to spend time.

The raised driving position adds to that feeling – yet, thanks to the large glass area, the Shogun isn’t intimidating to pilot despite its size. Low-speed manoeuvring in tight spaces requires plenty of wheel turning, but a reversing camera makes parking simple.

The engine isn’t the only star performer – the cabin shines as well. This is not because it’s a particularly classy environment – material quality is best described as durable, even if the layout is neat – but because it’s very flexible. The back seats offer plenty of space and tumble forward in two easy movements, leaving a simply enormous load area of 1,790 litres. There is even a pair of extra rear chairs under the boot floor which flip out to make the Shogun a full seven-seater.

There’s no shortage of equipment, either. Our Elegance model sits just below the range-topping Diamond version, and comes with a 12-speaker Rockford Fosgate sound system with 30GB of memory and iPod integration, touch-screen satellite navigation, Bluetooth, leather seats and climate control.

It’s easy to forget the Shogun is a serious off-roader. Yet under the skin lies a tough monocoque chassis, sophisticated drive system with the choice of two or four-wheel drive plus high and low ranges and, of course traction and stability control. It all adds up to a very impressive package.

Rival: Toyota Land Cruiser Another bullet-proof off-roader, the latest Land Cruiser matches the Shogun on emissions and returns even better economy at 34.9mpg. However, to get a similar level of kit you have to spend £41,605 on the LC4 model.