Nissan is building a new Z that German rivals will find hard to catch. A concept is due this year and it'll go on sale in 2019 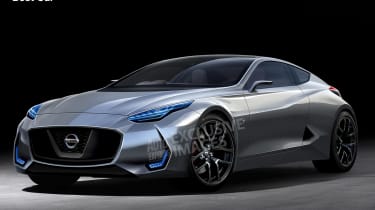 A new version of Nissan’s legendary Z-car is on the way. At the upcoming Tokyo Motor Show in November 2017, Nissan will reveal a next-generation Z concept powered by a range of powertrains that will challenge the best from Germany.

The new Z concept will adopt similar proportions to the outgoing 370Z coupe and, as our illustration reveals, it will have an edgier exterior with a far more pronounced grille that takes design hints from the latest Nissan GT-R facelift.

Under the skin the new model will be based on a shortened wheelbase version of the latest Infiniti Q60’s FR-L platform. Combining with this tried and tested architecture, three powertrains will be on offer. The first will be a tweaked version of Nissan’s in-house developed 3.0-litre V6 engine producing 304bhp. 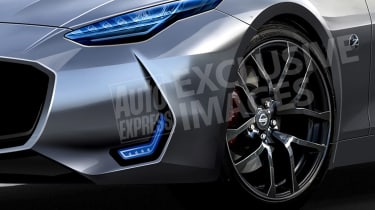 In addition to the entry-level, naturally aspirated V6 Auto Express understands that Nissan is working on a hybrid alternative that could make the Z the most powerful model in its class. This flagship version would employ the same 3.0-litre V6 paired with a 160bhp electric motor for a combined 500bhp output.

Completing the line-up will be a 3.0-litre V6 bi-turbo that will punch out 405bhp and 475Nm of torque. Power will be transmitted through a seven-speed dual-clutch transmission. That puts the new Nissan Z-car face-to-face with rivals like Porsche’s 718 Cayman S and BMW’s M2.

As we recently saw in the revised GT-R supercar, we can also expect to see greater attention to detail inside the new Z with much higher levels of interior trim quality and materials. The production version of the Nissan Z car is expected to land in showrooms by 2019 starting at around £30,000 for the base model, with a price tag of approximately £55,000 for the twin-turbo.

Are you looking forward to the new Nissan Z-car? Can it really beat a Porsche 718 Cayman? Let us know in the comments...