What happens when you put the 600bhp engine from a Nissan GT-R into the Juke crossover? We drive the Juke-R 2.0 to find out 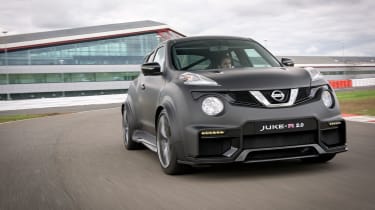 The Juke R 2.0 is one of those rare occurrences where the reins on a manufacturers imagination is slackened and its creativity and engineering prowess allowed to shine. What started out as a marketing exercise is now built to order for those with deep enough pockets. If it's ultimate exclusivity you're seeking there's nothing else like it.

If there’s a niche that needs filling you can count on Nissan to deliver. A compact crossover with a supercar spec sheet may sound like something destined for a motor show stand but Nissan has experience when it comes to developing such fantasies.

• Nissan Juke-R 2.0: the 200mph crossover  Back in 2011 Nissan transplanted the powertrain and running gear from a GT-R into a Juke. The 485bhp Juke-R was born and now there’s an updated version based on the recently facelifted crossover, but the tweaks amount to much more than just a new set of headlamps and bumpers as we experienced it from behind the wheel. 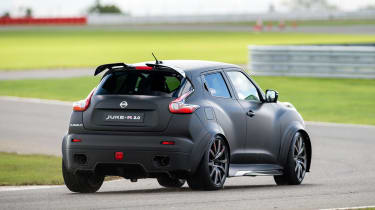 Re-named Juke-R 2.0, it uses the same basic formula as before, so the GT-R’s 3.8-litre twin-turbo V6 remains under your right foot, the seven-speed dual clutch gearbox at your fingertips and the sophisticated four-wheel drive system beneath you.

The platform is the same too, shortened by 150mm with a roll cage being added for additional strengthening. What’s new is the extra dose of power Nissan has extracted from the engine. Power from the 3.8-litre twin-turbo is up from 485bhp to 600bhp, which makes it a match for Nissan’s ultimate road-going machine, the GT-R Nismo. 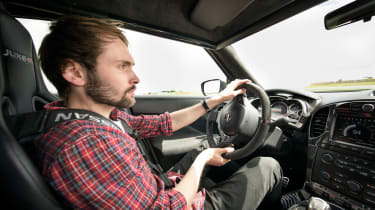 Clamber over the roll cage, sink into the Alcantara trimmed bucket seats, buckle up the four-point harness and you’re ready to go. There’s limited adjustability in the driving position so you sit long-legged and arms outstretched, with the GT-R cabin architecture but stubby bonnet and high roofline adding to the alien environment.

The engine fires to a metallic and fizzy idle, pressing the brake and the moving the GT-R gear selector down and across to ‘Drive’ sees us roll down the pit lane at Silverstone’s Stowe circuit and out onto the track. 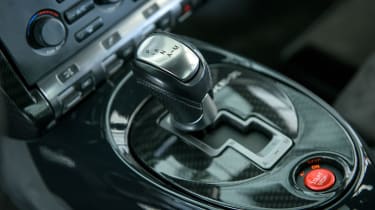 Amazingly, despite the beefier front bumper, more bulbous rear end and overall added aggression of the Juke-R 2.0, it’s remarkably approachable. Straight line speed is so fast its almost comical, with Nissan claiming 0-62mph in an estimated 2.9 seconds – that’s almost a one second improvement over the first Juke-R. The acceleration is relentless and gear change ferocious as you tear through the rev range, pulling the right paddle as the rev counter closes in on 7,000rpm. Stamp on the brakes and the Juke squirms and wiggles before you turn. Carry too much speed and you’ll be welcomed by speed-sapping understeer, but a lift of throttle will see it neutralize as the wide rubber bites into the tarmac and the Juke spits you out at the other end for another bout of ruthless acceleration. 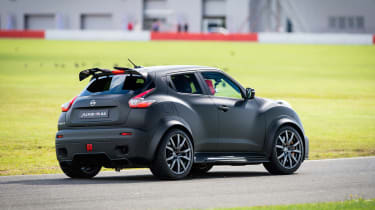 Loosen the reins on the stability control by flicking it into R mode and you can feel the Juke moving around beneath you, not so much that it becomes intimidating but enough to let you know where the limit lies. The added width to the front and rear tracks provide astonishing levels of grip an high-speed stability, but the shorter wheelbase give the Juke-R 2.0 a far greater level of agility than its stocky proportions would leave you to believe.     And the Juke-R 2.0 isn’t only confined to the racetrack, in fact its completely road legal. Better still, if a 600bhp Juke sounds like something that might interest you, Nissan may even sell you one. Two versions of the original Juke-R were sold for upwards of £400,000 to the same buyer in the Middle East and Nissan has no objections to making a few more.