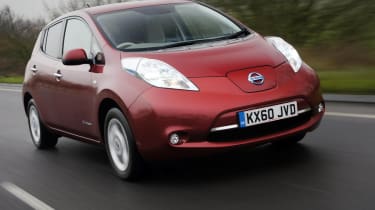 Price
£29,790 to £39,340
SPECIFICATIONS
The Nissan Leaf is the world’s first mass-produced full sized electric family car and it’s on sale in the UK. Under its rounded body, 48 compact lithium-ion batteries power an electric motor that produces the equivalent of 108bhp. A full five-seater with a decent boot and a claimed 100-mile range it’s designed to be a genuinely useable everyday family car that delivers zero emissions motoring to the masses.
Advertisement - Article continues below
[[{"type":"media","view_mode":"content_narrow","fid":"69337","attributes":{"alt":"","class":"media-image"}}]]
Styling
Designed from the ground up as an electric vehicle the Nissan Leaf features bespoke styling. With its distinctive looks the newcomer certainly stands out from from more mainstream petrol and diesel-powered rivals. Neat touches include the bold headlamps that have been aerodynamically developed to channel air around the door mirrors, which helps reduce wind noise in the cabin. The snazzy LED tail lamps are another highlight, although overall the Nissan Leaf looks like a conventional family hatch. Available in five different colours, all cars get blue badging and 16-inch alloy wheels.
Interior
With a decent boot and five seats the Nissan Leaf is far removed from the micro car sized electric vehicles of the past. The dash design is remarkably straightforward for such an advanced. Dominating the centre console is a large colour screen, which displays everything from status of the batteries, to the advanced sat-nav. Build quality is good, while the plastic trim is a cut above that found in other Nissan models. Only the slightly cheap feeling material covering the seats spoils the experience.
Advertisement - Article continues below
Advertisement
Advertisement - Article continues below

Driving and performance
Driving a Nissan Leaf could not be simpler. Press the start button and a musical chime signifies the car is ready, you then place the stubby gear selector into drive, apply the throttle and away you go. The electric motor generates an instant 280Nm of torque, so performance is spirited. Around town progress is silent and smooth, and there’s more than enough performance to keep up at motorway speeds. However, it’s important to remember that your driving style has an effect on the range – the faster you go, the less distance you are likely to travel. Dynamically, the ride is firm, the steering light and handling remote. However, a strict stability control system means the Nissan Leaf feels very safe.
MPG and running costs
The Nissan Leaf’s fully electric powertrain means you never need to visit a petrol station again. Charging the Nissan Leaf’s batteries costs around £2 and gives you a range of up to 109 miles - although, spirited driving and air con use will see this fall. For company car drivers the Nissan Leaf attracts no benefit in kind taxation and private buyers qualify for a free tax disc. Residual predictions of 38.1 per cent are not to bad either. A full charge using a domestic three-pin plug can take 12 hours, but buy a £995 base station for your home and this can be reduced to seven or eight hours. However, even with a £5,000 Government grant, the Leaf’s list price is still a little steep.
Advertisement - Article continues below
Practicality
The most practical full electric vehicle to date, the Nissan Leaf has three rear seat belts and can carry five people. The rear floor is a little high and there’s a central spine that restricts foot room for the middle occupant. The seat back has a split/fold function but a large bulge between the boot and cabin means you don’t get a fully flat luggage area. Nissan has developed an advanced telematics system called Carwings that allows you to monitor the cars charge state, set a charge remotely or pre heat/cool the cabin via a smart phone.
Reliability and safety
Bosses at Nissan are confident of the Leaf’s robustness and are offering the newcomer with a three-year 60,000-mile warranty, which stretches to five years for while electric powerplant and battery pack. In the event of an accident the chassis is designed to isolate electric components and prevent damage to the batteries, while the Nissan Leaf has a full array of passenger safety equipment including side airbags, stability control and a rear parking camera for safe manoeuvring.