Can a boosted range give the Nissan Leaf EV the extra practicality it needs to be truly ‘useable’? 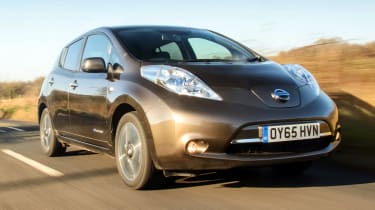 Extra electric range means the Nissan Leaf will appeal to a few more customers, but most will still be put off by the fact that you can't just fill up and go if you do happen to run out of power. It's still a spacious and quiet car, but the dull driving experience and a cheap-feeling cabin remain as well. It's hard to argue with ultra-low running costs for low mileage drivers, though.

The Nissan Leaf is the biggest-selling electric car in the UK, with over 12,000 models sold since it launched in 2011. The market is growing quickly, however, and rivals are appearing from all sides - BMW, Renault and even Kia all have fully-electric rivals on the market.

That's why Nissan has updated the Leaf for 2016 with 25 per cent more range than before, up to 155 miles. Although Nissan says most buyers only travel 62 miles a day, having that extra bit of range will open it up to even more customers, especially as it will now go further on a charge than the Renault ZOE and Kia Soul EV. Charging it to full takes an extra two hours, though.

There are a couple of other changes, including DAB radio and a smartphone app that can find your car for you or put the heating on before you get in. Other than that the Leaf is the same as before inside and out. 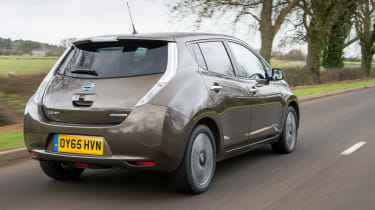 While the exterior design is aerodynamic, it does still look awkward, and the interior is still plain and feel cheap. There's plenty of space and it feels well built, but the hard plastics and inelegant driver display make the Leaf feel old-fashioned, which is disappointing considering the futuristic powertrain.

Thanks to the instant torque from the electric motor the Leaf still feels nippy around town. It's quiet and composed on the motorway too, although the motor does start to feel underpowered at higher speeds. The Leaf encourages gentle progress, with too much body roll and not enough steering feel to enjoy the driving experience when pushing harder. 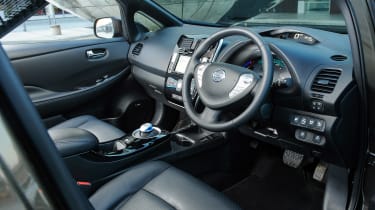 The Leaf's 370-litre boot is only a little smaller than the VW Golf's and significantly bigger than the Ford Focus'. There's plenty of rear legroom as well, so the Leaf is more useful as a family car than ever thanks to the longer 155-mile range. There's still not enough range for a family holiday, though, which will put some buyers off.

Only mid-range Acenta and top-spec Tekna models are available with the 30kWh upgrade, costing an extra £1,600 over the 24kWh model, which has a 124-mile range. If you're planning on using your electric car for a short commute, in reality the 30kWh's extra range will change little other than giving a little more peace of mind.