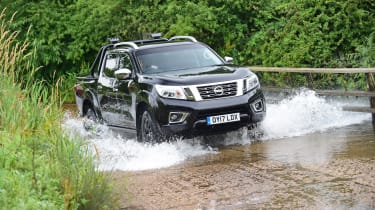 The Trek-1° carries a premium of £3,435 over the Navara Tekna, so weighs in at £35,065 for the manual, and £36,765 for the auto. When you consider a load cover alone could cost nearly £2k, the addition of the roof bars, spotlights and black additions make this a pretty good upgrade of an already decent pickup truck. And if you're looking at one for business use, then the tax costs make it an attractive alternative to an SUV.

There's no doubt that the UK loves a pick-up truck, and one of the big players in the class is the Nissan Navara. Its double cab body, one-tonne payload and torquey diesel give it the practicality needed of a commercial vehicle, and yet it has all the luxury kit you'd expect to find in an SUV. It's no wonder that Mercedes and Renault have used the Navara as the basis for their forthcoming X-Class and Alaskan pick-up trucks. But before these newcomers arrive, Nissan has launched a special edition range topper to draw in buyers, and it's called the Trek-1°.

Why Trek-1°? Well, it's the angle of longitude of the Navarre region in Spain, the place the Navara is named after. As the Trek-1° is the peak of the range, it comes with loads of kit as standard. It's based on Tekna trim, so sat-nav, 360-degree cameras and full leather is included, but it gets another round of extras on top of that.

While the recent Mitsubishi L200 Barbarian SVP boosted that truck's off-road ability, the updates to the Navara Trek-1° focus on style and practicality. The Trek-1° is available in Black Metallic or Storm White paint, while black painted alloy wheels, black side bars and a black roof bar with LED spotlights is added behind the cab. In addition, the Navara also gets a hinged and lockable tonneau cover for the load bed.

This will limit your cargo to items that are no taller than the cover, but it does give added security by keeping valuables out of sight, while gas struts hold it open like a hatchback on a car. Once opened, you'll find a handy load bed divider mounted inside. This can be moved back and forth, and helps prevent loose items from sliding around. Stylistically it look a bit awkward, because the large lip on the edge of the Navara's tailgate makes it look like the tonneau is too big for the bed, with a large overhang at the back.

Elsewhere, the Navara remains unchanged mechanically, so the Trek-1° drives exactly the same as a standard Tekna model. That means the 2.3-litre dCi four-cylinder diesel is punchy, while our auto-equipped model was a smooth performer that proved quite relaxing to drive. You still get a rather bouncy ride when the load bed is unladen - it's set up to carry a one-tonne payload, after all - but it's less severe than in some rivals, while road noise is kept well in check.

Considering the Navara's size, it's pretty easy to maneouvre, although we still feel that the driving position is a little cramped when compared to rivals. It feels like the seat is closer to the door than the centre console, encroaching on elbow room to your right. It's no disaster like being pinned against the door in a Land Rover Defender, but it does make the Navara feel cramped for its overall size.

The Trek-1° carries a premium of £3,435 over the Navara Tekna, so weighs in at £35,065 for the manual, and £36,765 for the auto. When you consider a load cover alone will cost nearly £2k, the extra roof bars, spotlights and black additions make this a pretty good upgrade of an already decent pickup truck.