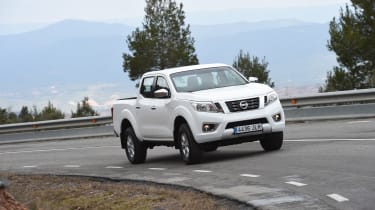 The Nissan Navara handles and rides well for a pick-up, and you won’t feel short-changed if you go for this engine and Acenta trim, which, at £24,745, slightly undercuts its Mitsubishi L200 Titan Double Cab rival. But we’d recommend trying to find another £3,400 and stretching to the higher-powered auto in Acenta+ spec, as the extra power and smoother-shifting box make it a better all-round package.

Pick-ups are recognised as simple, no-nonsense transport, but there are a few choices to make with the new Nissan Navara NP300.

King cab or double cab and manual or auto will be straightforward decisions for most, but what about when it comes to the engine? The 2.3-litre turbodiesel comes in entry-level 158bhp guise or with twin turbos boosting output to 187bhp, and we know from previous experience that the latter is up to the job of moving the big pick-up along at an adequate pace. But is the lower-powered engine?

We tried it on the motorways and A-roads around Barcelona to see how it fared – and performance was mixed. It’s not the most responsive of units low down in the rev range, and a claimed 0-62mph time of 12.0 seconds – compared to the 10.8 seconds of the 187bhp engine – felt optimistic. The load bed on our test model was empty, too, so it’s worth factoring that into the equation. 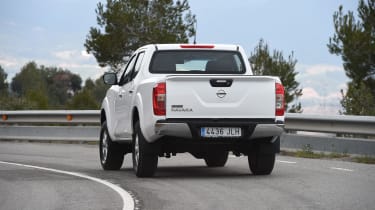 Once up to the motorway speed limit, however, the Navara felt comfortable and reasonably refined, with wind noise rather than engine drone the most persistent irritant.

At lower speeds on twisty A-roads the engine is a much more audible presence, but the Navara acquits itself well, proving more agile than you might expect. Yes, there is plenty of roll in corners, but it’s acceptable for such a big vehicle. And multi-link rear suspension with coil springs ensures that progress is not nearly as bouncy as we’ve grown used to in pick-up trucks over recent years. 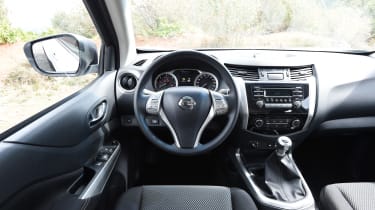 Perhaps the biggest drawback for the lower-powered engine, however, is that it is only available with a six-speed manual gearbox rather than the seven-speed auto on offer with the 187bhp engine (and the upmarket Acenta +, N-Connecta and Tekna trims). The manual has quite a long throw and isn’t the smoothest shifter around; the auto would seem a better fit, even though it cuts claimed fuel economy to 40.3mpg from the 44.1mpg of the manual.

Elsewhere, the Navara package remains as impressive as ever, with a decent 1,136kg maximum payload, a towing weight of 3.5 tonnes and decent rear seat space in Double Cab guise.

Our mid-spec Acenta model does without sat-nav and features a couple of blanked-off switches, but otherwise is adequately equipped and feels quite plush for a pick-up, if not quite up to modern SUV standards.