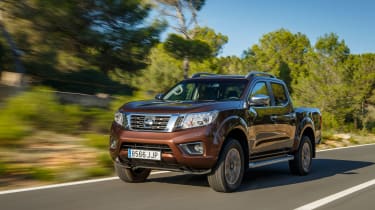 For a car it would be an insult, but describing a pick-up truck as ‘car-like’ is the highest of high praise. Pick-ups have a tough remit that involves carrying big loads, being capable off-road and serving as trendy recreational vehicles when your jet-ski needs a tow to the beach, but buyers want them to do it all with a car-like sophistication. It’s a tall order, but it’s what the new Nissan Navara NP300 is designed to deliver.

Nissan thinks it’s cracked the elusive car-like pick-up formula with the new Navara. This has been achieved, it says, by calling on 80 years of pick-up truck building knowhow and combining that with experience gained more recently creating market-leading crossover SUVs like the Qashqai and Juke. Crossover refinement and road manners married to pick-up toughness and capability sounds like the perfect blend, so is the Nissan Navara car-like? Well, yes and no.

The Navara NP300 rides on the same robust box frame chassis and uses basically the same selectable 4x4 transmission as its predecessor, but significant upgrades to the suspension promise a transformed driving experience. The Navara comes in King-Cab and Double-Cab guises, with the latter expected to account for 95 per cent of UK sales and featuring independent suspension all-round. That most definitely is car-like, as most UK pick-up rivals (and the more workmanlike Navara King-Cab models) trundle along with old-school leaf springs propping up the rear end. 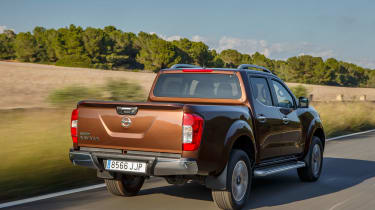 The result on the road will be hugely impressive to pick-up owners and familiar to anyone who drives a big SUV. The Navara maintains good composure through corners – it's a cut above other UK market trucks. It’s also adept at smoothing out rough surfaces; there’s still the occasional shudder transmitted through the cabin and a hint of float over big undulations, but the bouncy, knockabout quality we’ve become used to in pick-ups down the years is all but eliminated.

The steering is well weighted and lacks the nautical vagueness around the straight ahead that so often contributed to the canal barge driving experience of pick-ups a generation behind the Navara. It feels like a big hunk of truck on the road, but for a vehicle 5.2m long and weighing all but two tonnes, the Navara turns in promptly and is easily adjustable at speed. 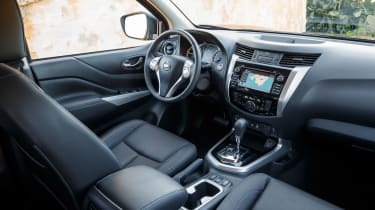 In the engine bay, Nissan has drafted in the 2.3-litre dCi diesel that’s currently used in over 300,000 vans built by itself and Alliance partner Renault. The turbodiesel is offered in two states of tune: 158bhp for the business-orientated Visia and Acenta trim levels or 187bhp for the higher-spec Acenta+, N-Connecta and Tekna variants, which are only offered with the Double-Cab bodystyle.

We tested the twin-turbo 187bhp dCi 190 engine with the 7-speed automatic gearbox (a £1,417 option) that’s set to prove a popular choice at the top end of the Navara range. The auto box is lifted straight from the Infiniti QX70 luxury SUV and it’s seamless in its shifting, if a little slow to respond, while the engine’s refinement is very good, for a pick-up. 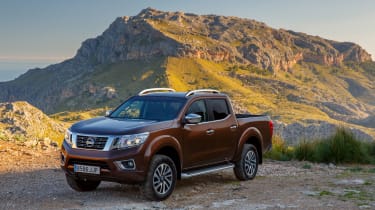 In terms of outright grunt, it’s less impressive. Even with 187bhp and 450Nm of torque on tap, you feel the Navara’s weight acting against you when you put your foot down. The 0-62mph sprint takes 10.8s regardless of the gearbox fitted, which is quicker than it feels on the road. Combined cycle fuel economy of 40.3mpg and CO2 emissions of 183g/km are OK, but opt for the standard 6-speed manual gearbox and you get class-leading 44.1mpg economy and 169g/km emissions. The downside of that manual alternative is a notchy, long throw action so we'd be inclined to pay extra for the auto.

If the Nissan Navara driving experience comes close to hallowed car-like status, the interior achieves it with knobs on. The cabin of the top-spec Tekna versions owes much to Nissan’s X-Trail SUV and perceived quality is a notch above what we’re used to in the pick-up class. Storage is limited to a small glovebox, door pockets and a bin between the seats, but there's enough rear legroom for a six-foot adult to sit behind a similarly sized driver in some comfort. 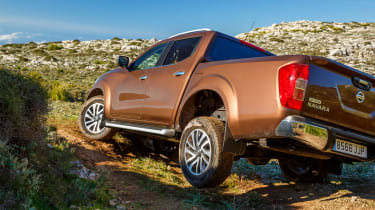 There are neat touches, too, including the large, clear digital display at the heart of the instrument cluster and the 7-inch NissanConnect touchscreen satellite navigation system that’s standard on Tekna models. Nissan also includes the Around View Monitor on Tekna Navaras. This relays images from a series of exterior cameras on to the central display screen to help with parking or avoiding off-road obstacles.

More importantly, all models get a big haul of safety kit, including seven airbags and the Forward Emergency Brake autonomous braking system that applies the brakes if it detects an impending collision.

All of which only leaves the business end of the Navara, where Double-Cab owners can load up a 1,052kg payload – roughly equivalent, says Nissan, to 2.2 cubic metres of firewood or an adult rhinoceros. There’s also a 3,500kg maximum towing capacity, should you need to take more stuff with you.