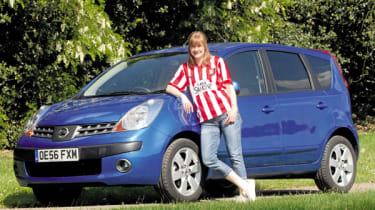 The first journey away for our long-term Nissan Note could only really be to one place - back to its roots in Sunderland, Tyne & Wear. A trip to the Nissan factory wasn't exactly my idea of fun, but a Sunderland AFC game at the Stadium of Light? What more could a girl want?

The team, challenging for the top spot in the Football League Championship under manager Roy Keane, didn't disappoint on the day, and neither did OE56 FXM. It covered the journey with total ease, cruising comfortably on the motorway, and proving just as nimble on the country roads as it had been in town.

There was no problem with space, either, as four of us were able to travel up in comfort. Even when I was relegated to the rear for the trip from Sunderland to visit friends near York, there was still plenty of legroom. And this was with two six-footers in the front, plus an array of stuff my young daughter insisted was absolutely vital in the back!

The glovebox, which doubles as a cooler, kept the drinks nicely chilled, and the central storage box on the dashboard provided handy access to sweets for both the driver and front passenger. Nothing is perfect, though, and while the Nissan impresses in most respects, there have been a couple of niggles since my first report back in March.

On two occasions, the Note hasn't started, with the Intelligent Key System simply refusing to acknowledge the presence of the plipper device - despite the fact it had already let me into the car.

Locking and unlocking made no difference, but after three or four minutes it returned to normal. We'll be keeping a close eye on this to see if it happens again - particularly as a similar fault seems to be afflicting the Suzuki Swift.

My only other issue is with the curiously long aerial. Before you enter any low-roofed car park, you must remember to fold it down if you want to avoid hitting the ceiling. I wouldn't mind if the radio reception was great, but medium wave is difficult to tune into as the signal is often crackly and intermittently cuts out.