Peugeot’s 308 GTi has had a subtle makeover. But is it enough to challenge the Honda Civic Type R and Renaultsport Megane? 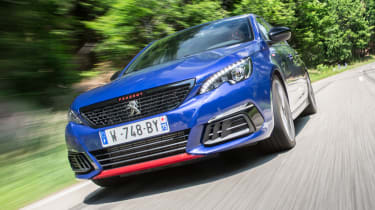 It’s not hard to understand why Peugeot didn’t mess too much with its winning formula when it comes to the talented 308 GTi. Fast, fun, practical and decent value, it the brand’s best hot hatch in years. However, it remains to be seen how this cautious approach will stack up against stern rivals such as the forthcoming Honda Civic Type R and Renaultsport Megane.

When it comes to the new Peugeot 308 GTi by Peugeot Sport, it’s clear the French firm has stuck firmly to the philosophy of ‘if it ain’t broke, don’t fix it’.

You see, whereas most brands leave few stones unturned during a model’s mid-life refresh, Peugeot has poked around its flagship hot hatch and concluded that it’s almost perfect the way it is. Yes it’s treated it to some subtle visual tweaks in line with the rest of the 308 line-up, plus there are some infotainment upgrades and a couple of new colours, but in all other respects it’s identical to the version that made its debut in 2014.

When the car is parked up, even dedicated Peugeot fans will struggle to spot the changes. At the front, a larger grille and revised headlamp design bring the 308 into line with the brand’s 3008 Crossover, while at the rear the subtly reprofiled tail lights get a smoked finish for their lenses. It’s all a bit low key, which is more than can be said for the car’s trademark £1,300 Coupe Franche paintwork option. As before the rear half of the car is finished in Black Perla Nera metallic, while the front can now be ordered in eye-catching Magenetic Blue. 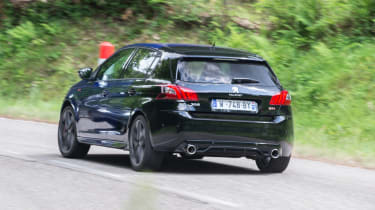 Climb aboard and the updates are even harder to spot. At a glance the cabin looks exactly the same as before, with the minimalist dashboard design being dominated by Peugeot’s bold i-Cockpit layout, which places the dials high up in the driver’s eye-line above the small three-spoke steering wheel. As before quality is nearly a match for the VW Golf, with solid build and plenty of high grade materials.

Look closely, however, and you’ll notice the centrally mounted 9.7-inch infotainment screen has crisper looking graphics. Better still, the capacitive display is now more responsive, meaning you no longer have to stab at the unit two or three times to access your desired function – although frustratingly the climate controls are still hidden in a sub menu.

As with the rest of the 308 range, the GTi now gets much improved smartphone connectivity, with Apple CarPlay and Android Auto featuring as standard.

However, for keen drivers it was the 308’s connection to the road that was a big selling point – and happily this remains unchanged. This is largely because Peugeot has left the GTi’s underpinnings untouched. Under the bonnet is the same fiery 267bhp 1.6-litre turbo and same suspension set-up that does a fine job of combining sharp handling with a reasonably comfortable ride. Also carried over is the six-speed manual gearbox – there’s no automatic option – that contains a mechanical Torsen limited slip differential. 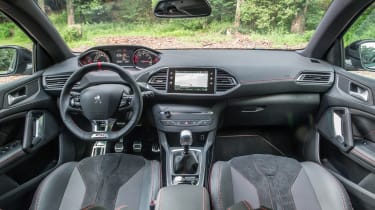 As you’d expect, performance is strong, with Peugeot claiming a rapid 6.0 seconds for 0-62mph sprint. The 1.6-litre unit can’t quite match the larger 2.0-litre VW Golf GTi or SEAT Leon Cupra for low rev muscle, or the 316bhp Honda Civic Type R for top end bite, yet once the revs climb past 3,000rpm the Peugeot pulls with real vigour. The unit also spins sweetly and is matched to a gearbox that boasts a satisfyingly precise action. You can also select Sport mode for a sharper throttle response, and menacing red dials, but the artificially enhanced engine note can get a little overbearing.

Yet as before, it’s the Peugeot’s chassis that shines brightest. The steering is direct, naturally weighted and progressive, plus there’s bags of grip. Playing its part here is the limited slip differential, which has an uncanny ability to keep you glued to your chosen line, even when accelerating hard mid-corner. There’s a touch of torque steer on bumpy surfaces as the front wheels claw the tarmac for grip, but it’s a small price to pay for the terrific traction. 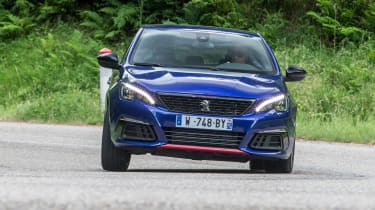 The beautifully balanced Peugeot has a playful side, too. Lift the throttle mid-corner or lightly dab the brakes and the car will tighten its line as the rear end swings subtly round by a few degrees.

Yet this agility is matched to a remarkably well-judged ride, which is firm at low speeds but never gets crashy or jarring. There’s no adaptive damping option, but the Peugeot doesn’t really need it.

Like all good hot hatches, the 308 is also practical choice. There’s a similar amount of rear seat space to the Golf, while the cavernous 470-litre boot will swallow almost everything growing families can throw at it.

Better still, the GTi is now available with Peugeot’s £500 safety pack that adds confidence inspiring kit such as adaptive cruise control, autonomous braking and lane keep assist. And at £28,590 it undercuts the 241bhp VW Golf GTI Performance by £1,325, plus CO2 emissions of 139g/km make it a decent choice for business users.