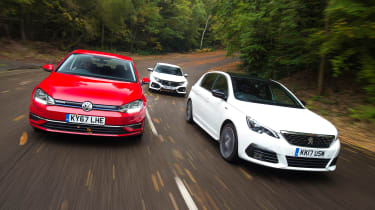 As diesel continues to be demonised, there’s a growing trend of buyers making the switch to petrol power. From superminis to SUVs, efficient, downsized turbo petrol engines are putting forward a case for themselves, but the evergreen family hatchback is one of the sectors where they make most sense.

This is one of the most competitive areas of the new car market, and as a result the models available are constantly getting better – as proven by the trio of great cars we’re testing here.

The latest Peugeot 308 is the newest of the three, and while its recent facelift was only mild, the French hatch continues to offer a top mix of space, comfort and equipment. Then there’s the Volkswagen Golf. It was updated last year with some new tech and a subtle revised look, just like the Peugeot, but here we’re testing the latest 128bhp 1.5-litre petrol version for the first time. It goes up against the proven 1.2-litre PureTech three-cylinder petrol 308, but it also faces competition from Honda in the form of its Civic, which has a 1.0-litre unit that matches the other cars for power.

If you don’t want to buy a diesel due to fears about taxation in the future, these are three compelling choices. But which one comes out on top? 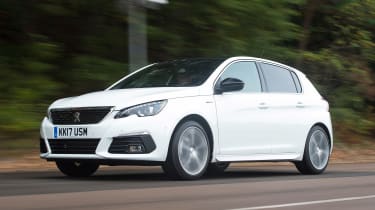 The Peugeot 308 has been around since 2014, but a facelift in 2017 brought it back up to date with revised infotainment and some subtle exterior changes. Here we’re testing the 129bhp 1.2-litre petrol model in GT Line trim, which costs from £22,390.

All three of our contenders here have just under 130bhp on tap, but the 129bhp Peugeot is the most powerful choice, by just 1bhp, and has the most torque at 230Nm; the Civic and the Golf both serve up 200Nm. 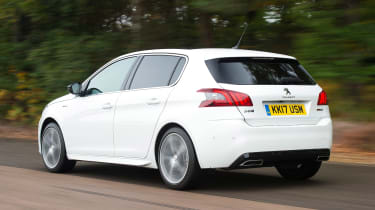 That helped the 308 to sprint from 0-60mph at the test track in 9.5 seconds, which was a tenth faster than the Golf and six tenths up on the Civic. This advantage is also partly down to a low kerbweight of just 1,089kg, compared with the Golf’s 1,280kg and the Civic’s 1,275kg.

However, it wasn’t the best performer going up through the gears: the 308 took 9.1 seconds to cover 30-70mph, slightly slower than the Honda’s 8.9 seconds and the Golf’s 8.8 seconds. It also matched the heavier Honda from 30-50mph in fourth and 50-70mph in fifth: both cars took 6.3 seconds and 8.9 seconds respectively, while the Golf completed those tests in 6.1 seconds and 9.3 seconds.

Even if the French model’s six-speed box isn’t the nicest to use, it’s no chore to drop down a gear and accelerate with the 308’s 1.2-litre three-cylinder unit. It’s definitely the most engaging engine of the three in this test as it feels more responsive and revvier, while also serving up good mid-range grunt. 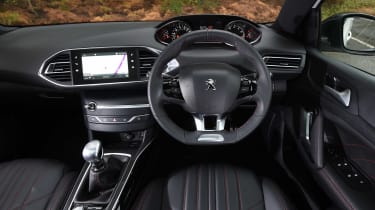 The 308’s low kerbweight helps its handling. Its quick steering and that small wheel contribute towards a relatively nimble feel, but there’s not much feedback with the Peugeot and the chassis isn’t as grippy as the Honda’s.

It’s closer to the Golf’s more neutral feel, but ultimately the 308 ends up in between the more comfortable Golf and sportier Civic. The difference really is minimal, though, and all three models are comfy enough, but can still satisfy keen drivers.

Testers’ notes: “Despite infotainment system updates, Peugeot hasn’t fixed one of the unit’s major flaws: the laggy screen that controls the heating and ventilation, which isn’t separate to the rest of the set-up.” 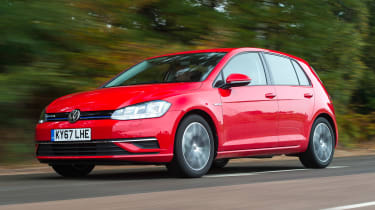 The Volkswagen Golf was the second most registered car in Britain in 2017, and it’s easy to see why: the evergreen hatchback is as spacious, comfortable and good to drive as ever. Last year’s facelift added this new 1.5-litre engine, updated infotainment and more safety features. Here we’re testing the 1.5 TSI EVO 130 model in SE Navigation spec, which costs from £22,255.

The minor changes to the Golf’s appearance are mirrored in the way it drives, because the VW is comfortable and refined, but also great from behind the wheel. 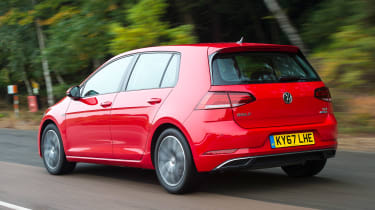 The 1.5-litre TSI engine is a brilliant addition to the range; it’s very quiet, smooth and put in a good showing in our performance tests. It was the fastest car of the three from 30-70mph through the gears, taking 8.8 seconds to the Honda’s 8.9 seconds and the 308’s 9.1 seconds. That’s helped by the sweet six-speed manual’s shift action, whereas you have to be more methodical with the box in the Peugeot.

Even so, the Golf did fall behind the 308 and Civic from 50-70mph in fifth gear, taking 9.3 seconds, while its rivals both completed the test in 8.9 seconds. In the real world there’s very little to separate them, however, and all feel punchy enough.

You don’t need to work the engine too hard to make progress, because maximum torque of 200Nm arrives at just 1,400rpm; much lower than in either competitor. That means the car picks up pace easily without having to shift down, and it also helps keep things quiet inside; it’s one of the 1.5 TSI’s best aspects, and the Golf is quieter than both rivals as a result. 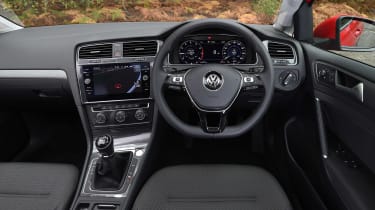 The direct and well weighted steering means the Volkswagen responds well on turn-in, plus there’s plenty of grip and good body control. It’s not quite as engaging to drive quickly as the Honda, but there’s not much in it. The real strength of the Golf is the way it blends that ability with refinement and comfort; it rides more smoothly than the 308 in particular, absorbing bumps in the road surface admirably.

Testers’ notes: “The Golf’s 1.5-litre TSI engine is the only four-cylinder unit here. It features clever tech that can deactivate two cylinders to help boost efficiency, shown by its low claimed CO2 emissions.” 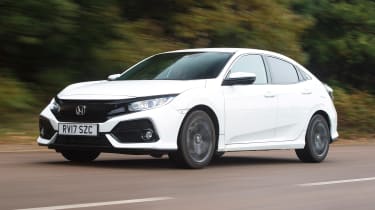 The 10th-generation Honda Civic impressed in 2017 thanks to its engaging handling and spacious interior. The sporty Type R version is our favourite hot hatch, and its DNA filters down into this standard model. Here we’re testing the 1.0-litre version in EX trim, which starts from £23,615 (although our pictures show an SR model).

Honda has followed the industry trend of downsizing its engines for the latest Civic, so this one is powered by a 1.0-litre petrol motor with a turbocharger to improve power and torque lower down in the rev range. It’s punchy from 2,250rpm, where the maximum torque is delivered from, and feels able to keep up with its larger-capacity rivals on the road, although it did trail them in some of our performance tests. 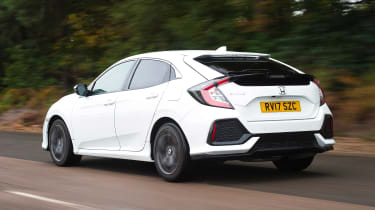 It was half a second slower from 0-60mph than the Golf, with a time of 10.1 seconds. However, the Honda was only a tenth behind the VW in the 30-70mph sprint and two tenths faster than the 308, helped by that lovely, accurate gearbox.

The close figures show that there’s not too much difference in terms of performance between our three rivals, but the Honda does have the advantage here for keen drivers because it’s the most fun car.

The low driving position is comfortable and feels sporty, while the steering is well weighted and fast in its response, offering the best feel. There’s lots of grip on offer and the clever torque vectoring technology helps the car hold its line through corners. It’s well controlled in terms of body roll thanks to the dampers’ sportier setting, and the Honda is more agile than either rival in this test as a result. 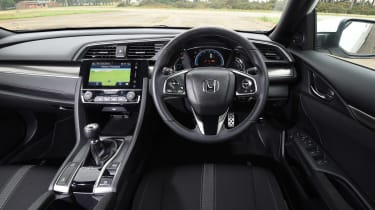 In comfort mode it’s refined and smooth, with a relatively compliant ride, although our noise tests showed the Civic was a little louder at 70mph than its rivals. The 1.0-litre turbo sits at higher revs at that speed, which contributes to that extra noise.

However, it’s a willing engine and is more characterful than the Golf’s four-cylinder 1.5-litre unit, but not as fun as the 1.2 in the 308. The manual gearshift is fantastic, and has a precise action that’s better than in almost any other hatchback on sale.

Testers’ notes: “The Honda has the smallest fuel tank of the three cars here, at 46 litres. That means you’ll actually end up filling it up more often than the 308, despite its better economy figure.”

It’s a very close result between these three family hatchbacks, but the Golf is so good in so many areas that it will make the most sense for more people. It’s comfortable, refined, good to drive, well equipped and great value, and the latest infotainment system is one of the best on the market at any price. The Golf manages all that while still being practical enough for most owners.

The latest Civic isn’t as well rounded as the Golf, while its infotainment system is a real letdown, but it’s more practical and fun to drive than the VW. It finishes ahead of the 308 thanks to lower running costs and engaging handling, while its performance is strong enough to match the 308. Although it’s not as polished as the VW, it’s still refined and comfortable.

The 308 is practical and stylish, but not as accomplished as the Golf, so it loses out here. It’s not as good to drive as the Civic, and although the list price is competitive, Peugeot’s PCP deals can’t match Honda’s. The PureTech is the best engine of the three and the 308 performed well, but it trails on value, while its updated infotainment isn’t enough of an improvement. 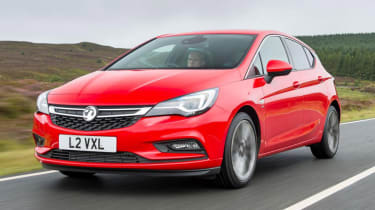 With its solid driving dynamics, strong comfort and impressive space, the Vauxhall Astra is worth a look. The 1.4-litre petrol in Elite Nav trim is good value, because it’s as well kitted out as our pricier test cars. You also get more power. 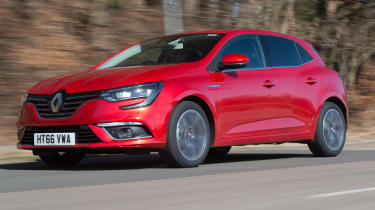 The 1.2-litre petrol Megane is a match for the three contenders in our test, and it’s nearly as well equipped as the Astra, too. In addition, the Renault has style on its side, and offers something different again in this class.