On the road in the new Peugeot 508 SW estate 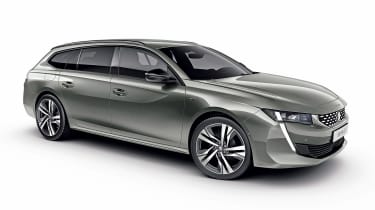 The new 508 hatchback is on sale now – but we’ve already had our first look at its stablemate, the 508 SW estate, which has been revealed ahead of sales starting in early 2019.

The 508 SW is designed to be an estate that scores on desirability as much as practicality, and its design certainly tries to deliver this, with a distinctive, muscular look. This is especially true at the rear, where a pair of strong shoulders give the 508 SW a ‘shooting brake’ form instead of a conventional load-lugger’s.

To get an idea of how this is going to translate into real-world usability, Auto Express joined Peugeot’s development team as engineers put the 508 SW up against some of its likely rivals on roads near France’s border with Switzerland and Germany. 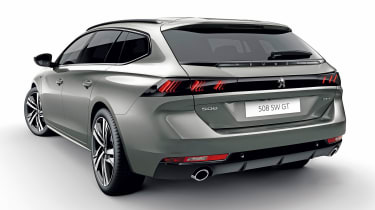 Our guide for the day is Olivier Desserprit, formerly PSA’s ‘point man’ for French presidential vehicles, but these days the boss of what’s called Customer Synthesis. It’s the division that keeps designers and engineers abreast of what buyers actually want – not just in Europe, but also in regions like China and Latin America. Customer Synthesis has input at an early stage to help position where Peugeot is trying to pitch its models. It then chips in during development tests to ensure that it stays on target, or adjusts the goals if buyer expectations have moved on in the meantime.

“We’re basically the first people outside of the research and development engineers to drive the 508 SW,” Desserprit says. “Building a car is about choices: manufacturing, engineering, design and so forth. At some points during the development you may have to adjust what you’re aiming at, or adjust the product.”

Desserprit and his team started bringing in potential rivals five years ago – everything from the overall class benchmark to models that score particularly highly in a key area, such as seats, refinement or infotainment. The first comparison drives tend to happen about a year before the car’s launch, but we’re joining the team for one of its final sign-off phases.

The competitors chosen for this type of activity are often pretty telling, and the 508 SW convoy is no exception. Our two camouflaged 508 wagons are joined by a BMW 3 Series Touring and a Volkswagen Passat Estate in rental spec. The Bimmer is a 318i SE, on tiny wheels and featuring the same 1.5-litre turbo petrol engine as a MINI. The VW has a 2.0 TDI diesel motor with 148bhp, but its interior trim is short on frills beyond the usual infotainment system.

For comparison, PSA has lined up 508 SWs with both fuel types: a 178bhp PureTech petrol and a BlueHDi diesel with the same power output. Both of the SW’s suspension types are present, too – a conventional set-up and one with adaptive dampers.

We base ourselves near Belfort and the process begins. Each stint behind the wheel lasts about 25 miles, before you get to move to either the next car in the convoy or the passenger seat beside you. You’ve about an hour in each vehicle to take as many notes as possible, and a varied route means that’s enough time to sample each car on motorways, French back roads and over speed bumps and potholes in towns. 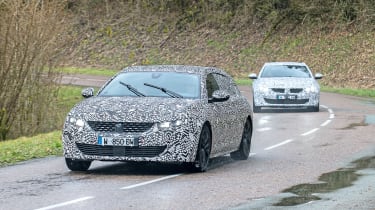 I’m not allowed to tell you what the 508 SW is like to drive (we get our first official taste of the finished car this autumn), but I can say that there’s impressive practicality on board, despite the dramatic exterior styling. There’s plenty of rear knee and headroom for two six-footers, plus neat touches such as USB chargers for occupants sitting there as well.

The boot is a useful size and shape, too, at 530 litres, or 1,780 litres (matching the Passat) with the rear seats folded down. The parcel shelf is positioned conveniently high, the boot floor is commendably flat and there’s next to no lip to load heavy items over.

For our final run we’re joined by Bernard Hesse, a PSA stalwart of almost 15 years and the man who has overseen the entire 508 engineering project, covering both the hatchback and the estate. He’s keen to garner opinions on how we’d position the convoy’s four cars. 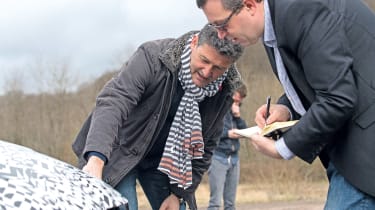 Hesse smiles when I tell him my views on where the 508 sits compared with the BMW and Passat, and when I point out that British customers never buy petrol 3 Series wagons on 16-inch wheels anyway. But he’s pleased when I compare the 508 SW’s cabin favourably with the Passat’s; it’s obvious that the VW has been a regular presence during the comparison tests.

“Today’s activity is about driving, yes, but it’s also about practicality,” says Hesse. “We have not actually been targeting the 3 Series on dynamics, but we are looking, for example, at how the aperture into the boot compares with the access that you get on the 508 SW. We have different parameters that we’re looking at across all of the car’s possible rivals.”

It’s a fascinating insight into the thought that goes into positioning new cars and ensuring that they’re still on point when they go on sale. Will the SW hit the spot with buyers? Peugeot hopes so, because it’s expected to account for well over half of all 508 sales. Our view is that on desirability alone, it certainly has promise.