Peugeot's fiery SEAT Leon Cupra rival spotted in production form, set to get 270bhp from a 1.6-litre turbo and hit showrooms later in 2015 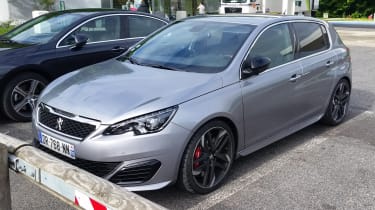 After Peugeot confirmed we'll be seeing the new 308 GTi at this year's Goodwood Festival of Speed, we've now seen the hot hatch with no disguise whatsoever. Set to go head-to-head with the SEAT Leon Cupra, the scorching French family car will hit showrooms towards the end of the year.

Using the same 1.6-litre four-cylinder turbocharged engine as the RCZ R, the 308 GTi will sit alongside the Audi TT rival as the most powerful car Peugeot produces, with around 270bhp. The RCZ R is unlikely to be replaced, so the GTi will take over the performance mantle for the brand on its demise.

Styling upgrades over the GT are subtle yet purposeful, including larger alloys with a neat matt black and silver design, red brake calipers, a honeycomb mesh front grille and chunky dual exhaust tips housed in a diffuser-style bumper insert. It also appears to sit a bit lower on its springs than before. 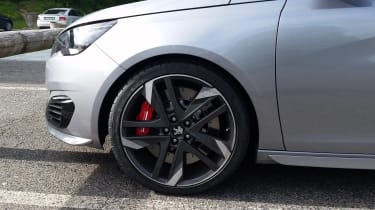 We've previously spotted disguised versions of the 308 hot hatch undergoing cold weather testing in Finland, and our source back then revealed Peugeot isn’t intending to get involved in the current Nurburgring hot hatch war - unlike Renault, Honda and SEAT.

Suspension tweaks, uprated brakes and a Torsen limited-slip differential are also expected to help manage the hike in power over the GT model. But we don't expect this to take on the same hardcore approach as cars like the new Honda Civic Type R, with a more compliant, road-biased setup.

It will be offered strictly with a six-speed manual gearbox and front-wheel drive, but future sports models from the brand will be made available with a new eight-speed automatic transmission currently under development. 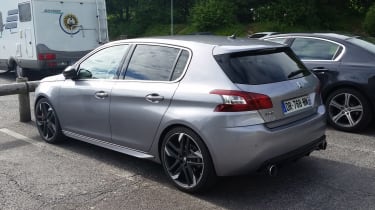 The 266bhp 1.6-litre THP four cylinder turbo is now used across several cars in Peugeot's range. As well as the RCZ-R, a detuned version currently provides power in the warm 202bhp 308 GT, as well as the 208 GTi.

There has been confirmation of any involvement from Peugeot Sport on the development of the GTi, but tinkering by Peugeot’s motorsport arm is likely to be saved for the even faster 308 R if it’s given the green light. We expect the 308 GTi to kick off from around £26,000 when it goes on sale later this year.

Now read about all the best hot hatchbacks you can buy in the UK.