We get behind the wheel of the Peugeot RCZ R, the first model that could spawn a new range of hot R models from the brand 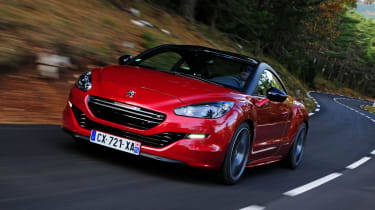 Sharp handling and serious performance make the Peugeot RCZ R feel like a rabid hot hatch, which feels a at odds with its pretty coupe image. The ‘R’ brand set to spawn a new family of models and this is a strong start. It has tremendous grip and traction on dry roads, but the numb steering and firm setup might make it a handful in the UK, and the dated cabin could also put some buyers off - despite the high level of standard equipment.

The last time Peugeot Sport built a road car it was the rally-car-for-the-road 205 T16 – so the company has set the bar pretty high for its latest production car, the flagship RCZ R coupe.

Normally when a manufacturer builds a high-performance special, it usually just hikes the power of an existing engine, adds some styling tweaks and puts up the price, but Peugeot has taken a rather different approach.

The RCZ R might use the same 1.6-litre engine as the warm ‘GT’ version, but a comprehensive set of mechanical upgrades including new MAHLE pistons, con-rods, a new twin-scroll turbo and direct injection mean it now produces a staggering 270bhp.

That makes this the most powerful 1.6-litre engine in any road car, and it drops the 0-62mph time to 5.9 seconds – faster than even the most potent front-wheel drive hot hatches. Top speed is capped at 155mph, but Peugeot has done far more than just increase the power and torque.

Bespoke toe and camber angles for the front wheels, a wider track and stiffer suspension all round are designed to increase agility and handling response, and an enormous set of 380mm Alcon front brakes with four-piston calipers help reign the new engine in.

The high level of tuning gives the RCZ R an almost rally-car like character on the road. There is a whoosh from the turbo on lift off, and once the revs climb above 3,500rpm it races towards the red line, keeping you busy snatching for the next gear in the short-throw six-speed gearbox.

Apart from the manic acceleration, the other advantage of keeping the engine so small is its remarkable efficiency. Peugeot claims even this R version will return well over 40mpg on the combined cycle and CO2 emissions of 145g/km mean it sits two tax bands lower than its nearest coupe rival, the Audi TT quattro.

Turn in response is much sharper than before, but the hefty steering is quite slow to react, and while there is an enormous amount of grip, sometimes it’s tricky to know exactly what the front wheels are up to. The stiffer springs and the 10mm drop in ride height can throw you off course if you hit bumps in the road or adverse cambers – something which might be a bigger issue on UK roads.

A new Torsen differential on the front axle is meant to help manage the power delivery, but in reality its interventions can be quite sudden, slinging you violently out of the apex of corners and leaving you clinging on to the small steering wheel - the system in the Renaultsport Megane 265 is much more intuitive.

Away from all the performance modifications the RCZ R gets only a few interior and exterior upgrades to set it apart from the standard car. The deep leather-wrapped bucket seats are comfortable and provide plenty of support, and the aluminum gear knob is familiar from the 208 GTi.

Some of the dash materials and climate controls feel a little outdated though, especially compared with the sleek, minimalist cabin from the new 308. The driving position is hampered slightly by the high clutch pedal, and even kids are unlikely to want to travel in the tiny back seats on longer journeys but the spacious boot means this RCZ is still a decent GT car - so buyers looking for a turly focussed track car might be dissappointed.