Shooting brake version of the Porsche Panamera makes its first public appearance at Geneva, ahead of going on sale this October 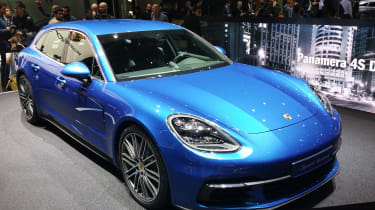 Porsche has revealed the Panamera Sport Turismo at the Geneva Motor Show, a new shooting brake version of Panamera four-door saloon adding a dash of practicality to Porsche's four-door coupe which will arrive in showrooms this October.

The practical new Porsche has been on our radar for a while now, having been snapped numerous times by our spy photographers and confirmed to Auto Express by Porsche CEO Oliver Blume last year. It's one of two new models for Porsche at this year's Geneva show, appearing alongside the new 911 GT3 4.0-litre.

Little changes from the 2012 Panamera Sport Turismo Concept. The new Mercecedes-Benz CLS Shooting Brake rival takes the second generation Panamera and adds an estate style boot, additional passenger space and an extra seat in the back, squeezed into the same 5,049mm length body. 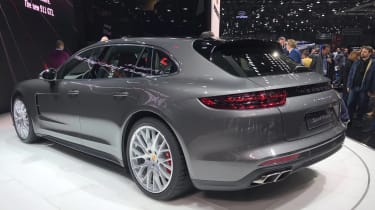 At the back, the shape of the new rear end is kept true to the Panamera’s four-door coupe mantra with a roofline that gently bleeds out, keeping bulk to a minimum. A new rear spoiler with an active wing element sits above the rear window, the angle of the spoiler changing depending on speed and vehicle settings. It can generate up to 50kg of downforce, but most of the time it’s tucked away to minimise drag and save fuel.

One of the biggest changes served up by the Panamera Sport Turismo is room for an additional passenger – the rear pew is now available with three seats, using a central third seat creating a 2+1 rear bench. The seats can be folded down together or individually in a 40:20:40 split, opening up 1,390-litres of room. Alternatively, two separate electrically adjustable seats separated by a centre console can be specced instead, as found in the Panamera Coupe. 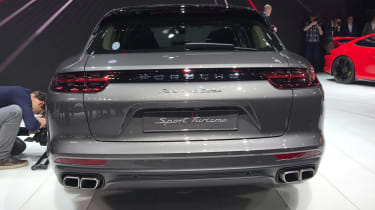 Order books for the Panamera Sport Turismo are open now, and a total of five engines are available – every option fitted with all-wheel-drive. 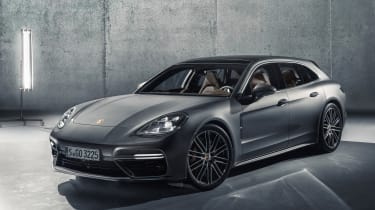 The Panamera Sport Turismo may not be the only Panamera derivative Porsche is plotting, though. Speaking to Auto Express in 2014, Porsche’s head of research and development, Wolfgang Hatz revealed that the platform underpinning the latest Panamera model could support even more bodystyles, though only after careful consideration.

“The reason we have done this [new platform] is so all things are already included; could be coupe, could be convertible, could be Sport Turismo. And now we have to decide which is the one that hits our needs,” Hatz told us. “Convertible? For me we already have so many good convertibles with the Boxster and 911. Is it something we really need? It’s something more for the luxury segment.”

Do you like the look of the new Porsche Panamera Sport Turismo? Let us know below...