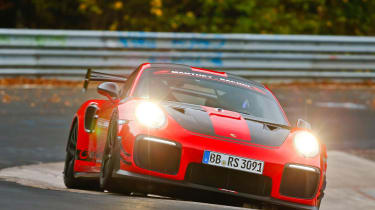 Porsche already held the Nurburgring Nordschleife lap record for a ‘road-approved sports car’ with the 911 GT2 RS, but the new GT2 RS MR has slashed the lap time even further.

The new package, which consists of suspension and aerodynamic tweaks, has resulted in a lap time of 6:40.33 minutes. The new benchmark is a full seven seconds faster than the existing record and twelve below the 6:52 set by the Lamborghini Huracan Performante in 2017. It's even quicker than the 6:45.9 posted by the all-electric NextEV NIO EP9.

The initials ‘MR’ stand for Manthey Racing - the motorsport team that have presided over six Nurburgring 24 Hour victories and numerous podiums. They also currently run the 911 RSR GTE cars in the World Endurance Championship, taking a class win at the Le Mans 24 Hours in 2018.

The record was set by development driver Lars Kern, the same man who set the existing GT2 RS record. The only modification to the GT2 RS MR was to fit a racing seat - a change which Porsche says did not deliver any weight benefits.

Producing 690bhp from a six-cylinder biturbo engine, the GT2 RS was already known to be the most powerful 911 ever built. However, this apparently unexpected result confirms that it is also the fastest 911 ever. 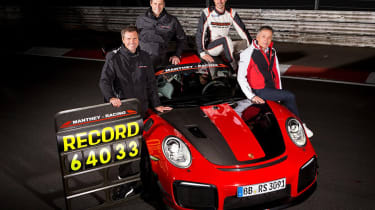 There is no doubt that the new lap time has extended Porsche's lead away from the Lamborghini Huracan Performante, although there will be some debate over the outright Nurburgring lap record.

The McLaren P1 LM features in a grey area with a time of 6:43, having been made road legal after specialists Lanzante converted a track-only P1 GTR.

Which car is the real ‘King of the ‘Ring’? Let us know in the comments section below!