Latest 992-generation of the Porsche 911 is longer and wider than before, and has been engineered for electrification

This is the all-new Porsche 911. Following a barrage of teaser images, spy shots and even a passenger ride in a prototype, the latest 992 generation of the iconic sports car has been officially revealed at the Los Angeles Motor Show.

And Porsche isn’t letting any of the excitement go to waste as it's on sale now in the UK priced from £93,100. If you order one now you’ll be taking delivery in the spring.

The recipe for the new 911 was simple according to Porsche bosses, ‘it has to be better than the old one.’ Therefore this 992 is longer, wider and taller than the model it replaces and has been engineered to adopt an electrified powertrain at some point in its lifetime. 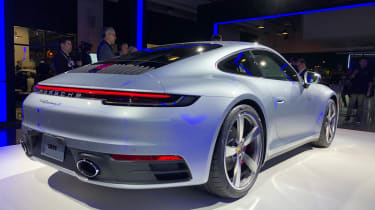 Like every generation of the coupe the design is unmistakably 911, although a few detail changes have been made to mark it out. The first are the addition of pop out door handles and a full-length LED strip at the rear, while a subtly embossed bonnet and new LED matrix headlamps give a subtle evolution to the 911’s face.

Bulging rear arches will feature on every version of the 911, as will the use of the wider ‘S’ body; that has also allowed Porsche to widen the front track by 45mm to improve grip and stability.

The only model that Porsche has announced official details of is the mid-range Carrera S. It’s powered by the same 3.0-litre twin-turbo flat-six as before but now develops 444bhp and 550Nm of torque – a 30bhp and 50Nm advantage over the previous model. That increase in power is down to a new layout out for the turbos and intercooler, while the addition of a new exhaust system is said to produce less backpressure and improve flow.

Initially the Carrera S will only be offered with a new eight-speed PDK dual clutch gearbox - a manual transmission will be added to the range early next year. 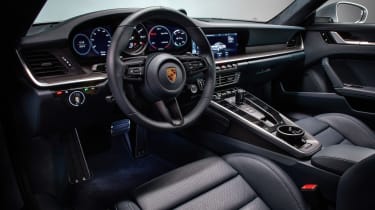 Porsche claims it can hit 0-62mph in 3.7 seconds, while opting for the four-wheel drive Carrera 4S reduces that to 3.6 seconds. Add the optional Sports Chrono Package, which brings Porsche Active Suspension Management (PASM), Porsche Dynamic Chassis Control (PDCC) and a 20mm drop in ride height, and a further two tenths tumble from the 0-62mph time.

An entry-level Carrera will join the range in March next year using a version of the same engine developing around 420bhp. WLTP has been blamed for its delay.

While the exterior is a mild evolution of the 911 look, the new cabin takes a much greater step forward. The instrument cluster centres around a new analogue rev counter, which is flanked by digital displays that mimic the previous 911’s five-dial arrangement. The centre console now features touch-sensitive buttons, like that on the Cayenne, while short cut keys to vehicle functions such as traction control and PDCC settings sit beneath a new 10.9-inch display housed within the dash.