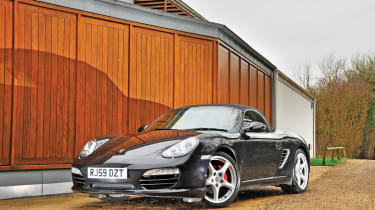 Porsche never goes too far with its facelifts, and its subtle approach pays off again with the Boxster. Engine upgrades improve economy, and sharpen throttle response and low-rev torque. Plus, the adjustable suspension balances everyday comfort and handling fun, while the limited-slip diff makes for even more thrills. Just take care with the options – they hiked our car’s price to £53,571!

The second-generation Boxster is showing no signs of a mid-life crisis. In fact, it’s faster and greener than ever. But can you really improve something that’s already so good? We climbed behind the wheel of the revised S model for a maiden drive on UK roads to get the answer.

As with all new Porsches, you’d be hard-pushed to spot any visual differences. But fresh bumpers, new mirrors, updated LED tail-lamps and, for the first time, daytime running lights add some sparkle. The interior remains as functional and as beautifully put together as ever.

Behind the driver’s head is a revised version of the 3.4-litre flat-six boxer engine, now with direct fuel injection for cleaner emissions and more punch. Power is up 15bhp to 310bhp, while CO2 output falls 42g/km to 223g/km. The regular Boxster gets a larger 2.9-litre engine, with 251bhp – that’s 10bhp up on the previous 2.7.

With more torque at low revs, the S is easier to drive around town. When the roads open up, though, the engine really hits its stride. Throttle response is instant and the power surge strong and linear all the way to the red line, with a kick above 4,000rpm.

Our car was fitted with the optional sports exhaust. This opens up electronic baffles in the tailpipes at the touch of a button, creating a gorgeous, bassy soundtrack. And you get to enjoy it more than in the fixed-roof Cayman as you can drop the fabric hood.

Revised springs and dampers offer slightly sharper handling, but Porsche’s clever PASM active suspension management stops the ride becoming overly harsh on rutted UK roads. In normal mode, it feels composed on anything but badly pothole surfaces; switch to sport, and the car tenses up and displays another level of ability. The limited-slip differential, which offers even more grip from the rear wheels when you’re driving on the limit, adds to the appeal.

Rival: BMW Z4 35i Stunning looks and a folding hard-top are only two of the Z4’s many talents. It rides better than the previous model, and feels more mature, while a range of powerful but clean engines makes it a practical daily driver.