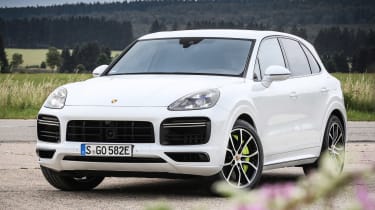 Porsche has pushed the performance envelope of the Cayenne SUV even further, with the unveiling of the Turbo S E-Hybrid version. The newcomer launches in both the Cayenne’s regular and new Coupe bodystyles.

Forget the Lamborghini Urus and the Bentley Bentayga; this new eight-cylinder, electrically assisted model is now the most powerful SUV the Volkswagen Group produces. It’s the joint most powerful Porsche, too, because it shares its running gear with the Panamera Turbo S E-Hybrid.

That means a 542bhp turbocharged 4.0-litre V8 sits under the bonnet, and it’s linked to an electric motor producing an additional 134bhp. Neither unit quite produces maximum power at the same time, but they deliver a total of 671bhp, with 900Nm of torque available, too. Power is sent to an all-wheel-drive system through an eight-speed Tiptronic gearbox. 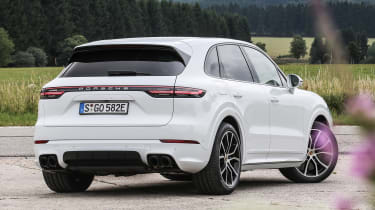 The Chrono Sports Package is fitted as standard, and Porsche claims a 3.8-second 0-62mph time and 183mph top speed. That makes this two-and-a-half tonne SUV 0.6 seconds quicker from 0-62mph than the new, flyweight 718 Cayman GT4, and faster flat out than the latest 911 Carrera.

A 14.1kWh battery feeds power to the electric motor. It’s mounted on top of the rear axle, which means boot space is down a little to 645 litres, and 500 litres in the Coupe. But Porsche also says that this super-SUV is capable of running on electric power only for up to 25 miles and at speeds of up to 84mph.

The battery takes 2 hours 24 minutes to recharge using the standard 7.2kW on-board charger, or around six hours with a conventional household plug.

The car starts in its default E-Power mode, and the engine will kick in only if the throttle is floored or the battery begins to run low. The steering wheel-mounted drive-selector switch allows the driver to run through E-Power, E-Hybrid, Sport and Sport Plus modes, managing the balance between hybrid efficiency and outright performance. 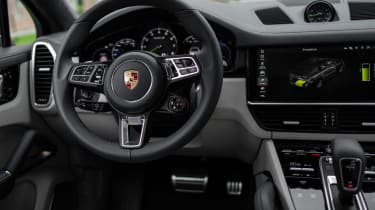 As a result of the electrical assistance, Porsche claims that the Cayenne Turbo S E-Hybrid is capable of returning 52.3mpg (WLTP), with CO2 emissions of 90g/km. But WLTP CO2 takes effect in April 2020, and that figure rises to 122g/km.

Porsche Active Suspension Management incorporates adaptive dampers with a spread of settings, linked with standard three-chamber, adjustable-height air suspension. By default, this new range-topping Cayenne is also kitted out with ceramic brakes (including a regen function). They measure a huge 440mm in diameter at the front and 410mm at the rear.

There’s little about the styling to mark out the Cayenne Turbo S E-Hybrid from other members of the line-up, but the giveaways include the fluorescent green badging and brake calipers. Orders for the newcomer are open now, with first deliveries from October. Prices will start from £123,349. 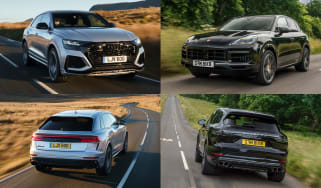 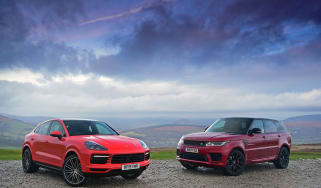 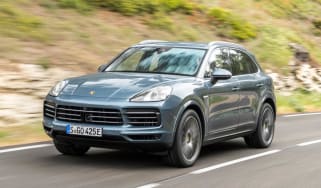 The latest Porsche Cayenne E-Hybrid is a great all-rounder and is hard to fault in any single area.