The revised Cayenne is fast, nimble and comfortable, and vastly expensive 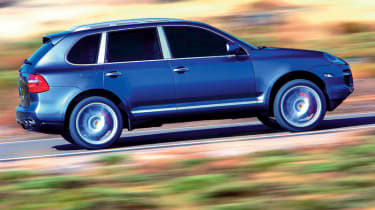 The revised Cayenne is an exceptional piece of technology - extremely fast, surprisingly comfortable and relatively nimble. But it is vastly expensive, its cabin is neither particularly practical or versatile, it's extremely thirsty and most premium estates remain more dynamic and rewarding to drive. The big Porsche is more of a super sports SUV, and arguably the least politically correct car on the planet at the moment.

It's the car the green lobby loves to hate. But that hasn't stopped the second-generation Porsche Cayenne arriving in the UK - with a range of new, more powerful petrol engines.

And with an astonishing price tag of £74,650, too! So, has the flagship Turbo model got enough about it to justify its tremendous cost?

As cosmetic improvements go, the sharper headlights and revised front airdams represent minor surgery, and despite the styling tweaks, the SUV is still far from handsome. The changes have lowered the drag factor significantly though (from 0.39Cd to 0.35Cd), and interior quality is also improved with better materials.

The cabin layout is user-friendly, but it's not that large or versatile, despite a decent 540-litre boot (1,770 litres with the seats folded). However, with a turbocharged 500bhp V8 engine under the bonnet, practical considerations are not what the big four-wheel drive is really about.

And, before you complain that the German firm has lost touch with reality, it's worth noting that each of the three powerplants on offer now features direct-injection technology. This means CO2 outputs have dropped across the line-up and fuel economy is improved by up to 15 per cent.

It's unlikely that the climate change lobby is going to embrace the new Cayenne, though. Even the entry-level 3.6-litre V6 only returns 21.9mpg on the combined cycle, and puts out 310g/km of CO2. With figures like that, you might as well go the whole hog and buy the 4.8-litre V8 twin-turbo we tested, which returns 19mpg and emits 358g/km respectively.

Whatever your thoughts on the green debate, the model is a technological tour de force. The off-roader can deliver the 0-60mph sprint in five seconds and top 170mph, which is a lot faster than a supercharged Range Rover Sport. It's also cleaner, and more efficient as well.

Handling is taut for an off-roader, too, while the adoption of PASM (Porsche Active Suspension Manage- ment) has markedly improved the previously jarring ride quality. As an overall package the Cayenne Turbo is improved, but the price and styling still make it an extravagant choice.