Despite the presence of serious rivals from Lamborghini and Audi, the amazing Porsche Cayman S retains its title 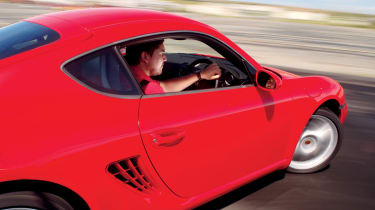 What a result for Porsche! For the first time in the nine-year history of the annual Auto Express Greatest Drives, our reigning champ has retained its title.

To the uninitiated, it’s nothing more than a poor man’s 911. But as anyone who has driven one can attest, the Cayman is no weak link.

This year’s 20-car line-up was arguably the most talented we’ve ever assembled. Looking through the list of contenders even before we went to Anglesey, it was hard to predict which would do badly... or which would be good enough to pose a real threat to the Porsche.

Yet on road or track, the Cayman was untouchable. Rivals were faster, newer and wilder, but none had the German’s all-round excellence.

So what is it that makes this Porsche so good? Well, if you reversed the question and asked what it did badly, you’d have a very short list. You could say the styling is an acquired taste, the cabin is a bit plain, it’s not brilliant value and is sparsely equipped.

But leave those out of the equation, concentrate on the driving and you would have to conclude that Porsche’s engineers are the best in the business. Get in, and the car fits around you. The driving position, pedal layout and gearchange are all perfect – the sports seats are definitely worth having, too.

Even 911 owners will be forced to concede the flat-six powerplant sounds better here, mainly because it’s closer to the driver in the mid-engined Cayman, rather than slung out behind the rear axle as it is in the 911. The noise is so distinctive, too, from a guttural rattle at low revs through to a rasping wail as the 7,000rpm red line closes in.

On the rollercoaster roads through Snowdonia, it was magic. We deliberately shifted down and blipped the throttle to enjoy the noise bouncing off the stone walls.

Even more impressive was the Cayman’s astonishing composure on any surface. The Audi R8 was equally capable, but didn’t provide as much feedback as the Porsche. The steering and suspension talk to the driver constantly, so not one detail goes unnoticed. At the circuit, this was evident in the Cayman’s amazing precision – nearly as taut as the fearsome 911 GT3 RS, it could be placed to the nearest millimetre, and displayed the balance and agility of an Olympic gymnast.

Those who stepped into the junior Porsche for the first time said afterwards that they could tell it was something special by the time they came out of the first corner. After three days, the Cayman had convinced us it deserved to add a second Greatest Drives trophy to its cabinet.