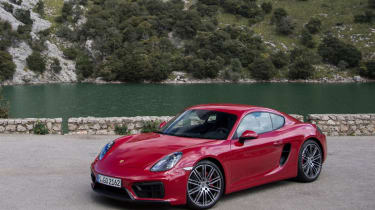 The GTS model is undoubtedly the ultimate Cayman, and for some people that will make it a no brainer. But while the extra kit adds up to more than the premium over the normal Cayman S, when you delve into what additions you'd actually really want, it's not such a great deal as it first appears – we’d stick with the standard Cayman S and spend the rest on goodies from the options list.

Porsche has added a new GTS model to the top of the Cayman range. The Porsche Cayman GTS comes with a 15bhp power upgrade to 335bhp, some mild styling tweaks and lots of extra kit as standard. The price is £55,397, which makes the car £6,614 more than the Porsche Cayman S on which it's based. So is it worth the extra cash? Well that depends whether you'd be selecting the added equipment anyway. Take the sports exhaust for example; on an S this would set you back £1,530 and it really is a must-have item because it provides a great mouthpiece for the 3.4-litre flat six engine.

• Porsche Cayman S vs rivals
The GTS also gets Porsche Active Suspension Management (PASM) which is normally £971. This is something we'd recommend adding to the car anyway as the 10mm lower ride height provides improved agility. In normal mode the ride is compliant enough for cruising round town but at the press of a button you can stiffen the dampers for a more focused drive. If you like, you can forego the PASM in lieu of the sports chassis which lowers the car buy a further 10mm but uses fixed rate dampers. You'd pay £689 for this as an option, but really it's only going to appeal to people who plan to take their Cayman on track regularly. 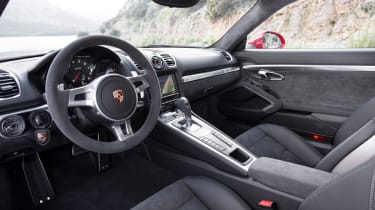 The GTS also boasts some extra Alcantara bits and pieces in the cabin and features leather on the dash and door tops as standard. This extra hide really lifts the car's interior luxury to another level and is why, on a Cayman, we would always recommend upgrading to the optional extended leather pack even though it's £1,740. However, this is where the must-have additions end.

• Best used sports cars 2014 Yes the GTS may have the £546 sports plus seats with their added bolstering and partial electric operation, but you don't really need them. And if the £320 smoked rear light clusters and £447 directional headlamps weren't standard we certainly wouldn't miss them either. Yes, the 20-inch alloy wheel upgrade is nice, but combined with the other three aforementioned items the total cost is pretty much the same as the factory sat nav system, which is a much more welcome addition. It's the same story with the Sports Chrono package. This would usually add £1085 to the price of an S and includes dynamic engine mounts and launch control on cars with the PDK automatic gearbox, enabling the GTS to sprint from 0-62mph in 4.6 seconds - which is 0.3 of a second quicker than a standard Cayman S. But in the real world, launch control is a gimmick you’ll soon forget. 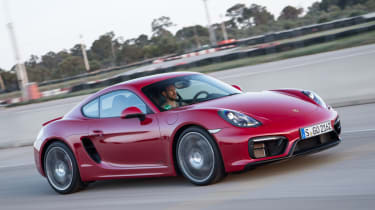 That isn’t to say driving the Cayman GTS isn’t an absolute joy – you’ll be unlikely to notice the extra 15bhp on the road, but the handling has all the fluidity we’ve come to expect. The wheel is brimming with feedback, while the chassis delivers grip when you need it and poise when you over step the limits. When you do all the maths, you figure out that instead of the GTS you could have the normal Cayman S with all the options you really want plus have around £2,000 spare which you could spend on the sat nav or the PDK gearbox. For those whom only the ultimate Cayman will do, the GTS will make financial sense. But for everyone else, it won't.

See how the Porsche Cayman S stacks up against the Lotus Evora and Audi TT RS Plus here.