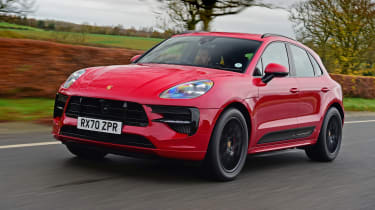 What Porsche has achieved with the new Macan GTS is remarkable. This is a performance SUV that feels as agile as a great hot hatchback, yet remains practical, comfortable, beautifully finished and furnished with excellent six-cylinder prowess. There are faster alternatives out there, but few get close to offering the same sophistication, character or grin-factor.

This is the new Porsche Macan GTS: The most driver-focussed version of Stuttgart’s hot SUV. Updated for 2020 and more than ever, standing out from the rest of the hot but heavy SUV crowd with a set of distinctive, almost hot-hatchback-like characteristics.

Yes, this isn’t a hatchback in the traditional sense, but the idea doesn’t seem so far fetched. In any form, the Macan is a brilliant car to drive; one which, once pointed towards a challenging bit of road, belies its size, weight and height above the ground.

While a four cylinder petrol engine kicks off the Macan range, the GTS gets a V6: a 2.9-litre unit backed up with a pair of turbos sitting within the two cylinder banks. The new model makes 375bhp and 520Nm - up 20bhp and 20Nm respectively on the old car. Drive is sent to all four wheels via a seven-speed PDK dual-clutch gearbox that has been recalibrated for this iteration of the GTS.

The result is that the Macan covers the 0-62mph sprint in 4.9 seconds - or two tenths faster when equipped with the Sport Chrono Pack, which enables full-bore launch controlled starts. On paper, that figure doesn’t seem that spectacular when some of the hottest hatches dip below the four second mark. Indeed some smaller fast SUVs like the four-cylinder Cupra Ateca are almost on level terms, and the likes of the six-cylinder Alfa Stelvio Quadrifoglio and BMW X3 M easily have the legs on the Porsche.

In reality, however, the Macan GTS feels very special indeed. Its straight line speed never feels anything other than plentiful, and its forward shove is accompanied by a lovely V6 howl - a more tuneful note than the angry bark you get from the Stelvio or the more manufactured sound of the BMW. 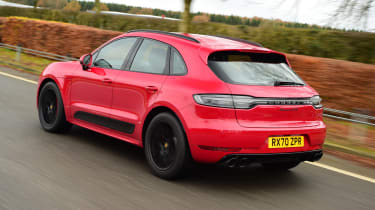 Things only get better when you approach a corner. The regular Macan runs rings around pretty much any other hot SUV, but the GTS is the sharpest version yet. The standard chassis is dropped 15mm closer to the ground courtesy of a sportier suspension setup, and the dampers are returned to suit. The ride height can drop a further 10mm with air suspension - a £1,044 option fitted to our test car. The wheels measure 20-inches all round, and house brakes that measure 360mm at the front and 320mm at the rear (carbon ceramic discs are optional).

Even on a cold, damp November day in the UK, the level of grip it finds is remarkable. Accelerate hard out of a corner, and you can feel the power being diverted to the wheel with the most bite to maximise traction. Unless you drive it like a complete hooligan, that is; boot the throttle out of a tight corner, and the rear wheels break traction and the Macan becomes more playful than any other car of its type. The GTS' greatest trick is that it gives the driver the confidence to play with it in such a way - a result of brilliant suspension control, powerful and reassuring brakes, and steering that is both wonderfully weighted and that offers plenty of feedback.

It rides well, too. With the suspension set to comfort, the GTS manages to both float over larger bumps while dealing sharper undulations with quick, positive responses. Dial the chassis into Sport or Sport Plus settings and it gets progressively firmer. The latter makes the ride feel somewhat busy along most surfaces, but it’s never harsh and never bouncy. It’s almost perfectly judged. 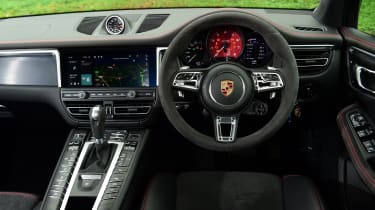 Exploring the abilities of the GTS requires a constant reminder that this is not an Audi RS3-rivalling hot hatchback, but a mid-size SUV that weighs just over 1900kg. One that boasts plenty of space for five occupants and a fairly roomy 488-litre boot.

Inside, the fit and finish feels immaculate, and while the button-heavy centre console looks almost bewildering compared to many rivals’ minimalist approaches, you soon become familiar with the layout. Details like the gorgeous steering wheel, here heated and trimmed in alcantara as a £720 option, feels perfect in the hands, and the driving position is spot on.

Of course, there is a price to pay for this near-faultless ability. Prices start from £58,940, but that’s not exactly a massive step up on the most extreme hot hatches like the Mercedes-AMG A45 which, before options, costs a shade under £50,000.

Compared with the Alfa Romeo Stelvio Quadrifoglio and the BMW X3 M, both of which cost far more - over £20k in the case of the 503bhp BMW- it feels like a bit of a bargain, and you’ll have just as much fun even with the power deficit. If you want more poke with the same chassis the 444bhp Macan Turbo is a further £10k upstream, and even closer to the Alfa and BMW for straight line speed.

Of course, being a Porsche, it’s very easy to get carried away with the options, as the car shown in these pictures proves. With all the extras added on, the total price comes to £75,380, though of those extras only the £804 Sport Chrono Pack and the air suspension actually have any influence on the way the car drives - the options list has an extensive selection of cosmetic items for buyers to choose from.

Porsche or not, some of the features on the options list seem a little measly. For a car in this segment, we’d really expect front heated seats (£294), rear side airbags (£261), and auto dimming mirrors (£252) to be standard. It’s a shame that pretty much all of those red interior highlights that set the GTS apart from other Macans add to the cost, too.