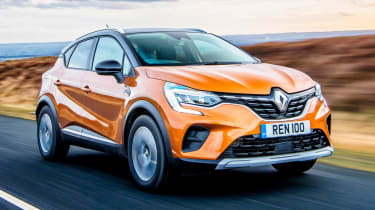 Most of us remember 2012 for the London Olympics, but at Renault there’s a different memory: the launch of the original Captur. It was the company’s first small SUV and a model that has gone on to sell 1.5 million examples worldwide. The time has come for a new one, though, and now we’ve tried it on British roads.

The new Captur sits on the same CMF-B platform as the latest Clio and it’s 110mm longer, 19mm wider and 17mm taller than the original model. A wider grille and LED lights front and rear help it to cut a more impressive figure on the road.

Basing it on the new Clio has transformed the driving experience, too. The steering is precise and gives you the confidence to place the car accurately on a narrow road, while the soft suspension makes the Captur much more relaxed than many of its rivals. There’s a fair amount of body lean, but any roll is well damped, and the pay-off is a comfortable ride, even on rougher surfaces. 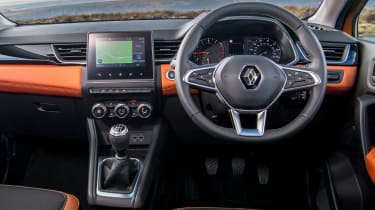 Inside, the influence of the new Clio is inescapable, but this is no bad thing; the use of soft-touch plastics throughout the interior makes the Captur a class-leader in this regard. Build quality feels strong, too.

The new platform and bigger dimensions have brought gains in passenger space and practicality. Rear legroom has improved, Renault says, and boot space has swelled to 536 litres. There’s a caveat, though: the rear bench now slides back and forth, and that headline figure assumes you’ve pushed the seats so far forward they are virtually unusable. Shove the bench right back and you’re looking at 422 litres of volume. 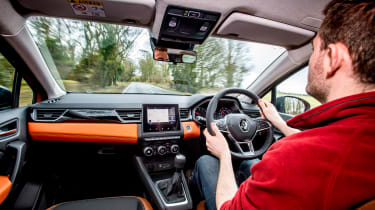 A 4.2-inch digital display within the instrument cluster is teamed with a seven-inch colour touchscreen, and navigation is provided on all but entry-level Play models. The graphics are sharp enough and the screen responsive, but the set-up is not as intuitive as systems in VW Group rivals. So it’s good news that Apple CarPlay and Android Auto connectivity is also standard.

The Captur’s biggest failing? That’d be the 1.0-litre petrol engine tested in this TCe 100 model. The 99bhp unit can only muster 160Nm of torque, and it’s every bit as pedestrian as the 13.3-second 0-62mph figure suggests. The saving grace is that the claimed fuel economy of 47.1mpg looked easily achievable on our drive through the Cotswolds.

On the motorway, the Captur needs to be revved hard in low gears to pick up speed, although the five-speed manual in our car felt nice and slick. We’ve also sampled the 1.3-litre TCe 130, and while its automatic gearbox is sluggish as you pull away from junctions and roundabouts, the additional power makes the car much more capable. 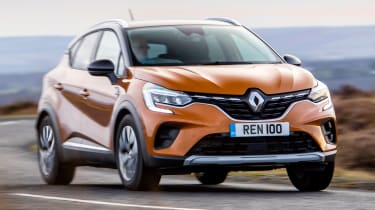 The Captur has the ingredients to be a sales success, and Renault’s competitive finance will put it at the front of buyers’ minds. Monthly repayments of £249 over a 49-month term follow a deposit of £289 on Iconic TCe 100 cars, putting it in the same ballpark as the SEAT Arona, Skoda Kamiq and Citroen C3 Aircross.

Factor in Renault’s five-year, 100,000-mile warranty, and you’ve got a really strong offer on the table. For those after even lower running costs, a plug-in hybrid variant arrives in July. In what will be a first for the class, its 9.8kWh battery could offer up to 30 miles of range.