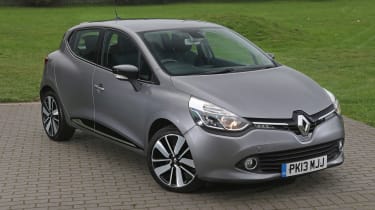 The fourth-generation Clio is easily the best of the lot in pretty much every way. It might not look as cute as its predecessors and it didn’t scoop a Car of the Year award (unlike the Mk1 and Mk3), but it’s stronger, safer, offers a higher spec and is better built than ever. With some excellent engines, a big boot and a reasonably spacious cabin, the Clio has lots to offer, even if it isn’t a class leader in any particular area. Entry-level cars are spartan, but mid-range ones have lots of kit. Even better, it should all work; our Driver Power surveys show the Clio can match key rivals when it comes to build quality and reliability.

Renault has some great small cars in its back catalogue, including the 4 and the 5. In 1990 the brand came up with another landmark model: the Clio.

Famous for its adverts that featured Nicole and Papa, the first edition of the Clio looked stylish and was great fun to drive. Yet, as with the second and third generations that followed, it wasn’t the last word in build quality or reliability.

So when Renault introduced the Clio Mk4, one of the key requirements was that it was built to a far higher standard. And that’s what we got, without losing the enjoyable driving experience, the value for money or the cheeky design. 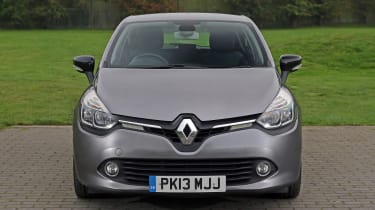 The Clio Mk4 reached UK showrooms in February 2013 in five-door hatch form only, with 0.9 TCe or 1.2 petrol engines or a 1.5 dCi diesel. Initially there were Expression, Expression+, Dynamique MediaNav and Dynamique S MediaNav trims. But GT Line spec was added in June 2013, alongside the 197bhp Clio RenaultSport 200 Turbo.

In October 2013 a dual-clutch auto gearbox (dubbed EDC) was introduced on the diesel, then in January 2015 the optional GT Line Look Pack brought sporty details for Dynamique models.

Revisions in November 2015 saw the Expression+ trim renamed Play, while a DAB radio became standard on all cars with R-Link multimedia. A facelift in September 2016 added a higher-quality interior, optional LED headlights, a Bose audio system and improved infotainment.

The 0.9-litre petrol is significantly perkier than the 1.2-litre engine, and while you’ll pay a small premium for the smaller, more modern unit, it’s worth the extra. The diesel is a great choice, too, because it’s muscular, smooth and economical. 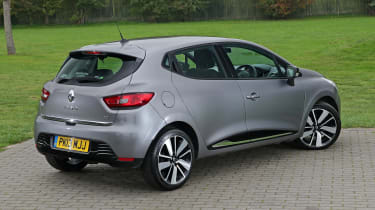 Few options are available on the Expression, but extras worth seeking out on the Dynamique include a glass roof, heated seats and a rear parking camera.

Alternatives to the Renault Clio Mk4

As an all-rounder nothing can beat the Ford Fiesta. It is plentiful, great value, brilliant to drive and practical, too. The UK’s best-seller is also well equipped if you avoid entry-level models.

Most of these attributes are shared by the Vauxhall Corsa, although it’s not as much fun to drive, or as polished.

The Volkswagen Polo costs more than the Renault, but it’s a class act even if it’s lacking in flair. It’s offered with some excellent engines, though. The Skoda Fabia is a cut-price Polo; it shares the VW’s running gear and much of its technology, but at lower prices.

The Mazda 2 looks sharp and is good value. It’s fun to drive and well equipped if you buy at least a mid-range model.

Standard sat-nav doesn’t allow full postcode searches. An upgrade is less than a fiver, but it’s a fiddly process. 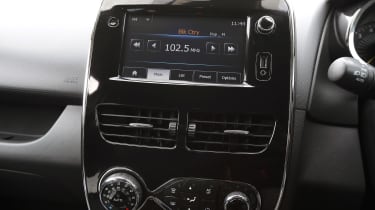 Ignition coils can fail, leading to poor running. Replacing the coil for around £40, plus fitting, solves the issue.

Tyre pressure monitoring sensors aren’t always very robust; the only option is to replace them.

Sensors for the anti-lock brakes can also fail. If there’s a fault it’ll be given away by a warning light on the dash.

Thanks to its stylish design and generally high-quality plastics, the Clio’s cabin is really pleasing, although some materials lower down are less impressive. The R-Link multimedia system (where fitted) works well, there’s loads of space and the boot is a decent size, too. At 300 litres it’s bigger than most; fold the back seats and this rises to 1,146 litres. 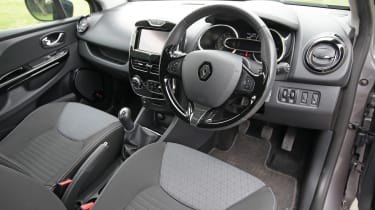 Eight recalls is no cause for celebration. Two were for possible front brake hose chafing damage caused by the wheelarch liner. Another was for potential fuel leaks, while wheels falling off prompted two more.

The rear spoiler detaching led to a further campaign, and another recall was because of windscreen wiper defects in sub-zero conditions. The most recent recall was due to the rear seat hinges failing in a crash.

The Clio ranked above key rivals like the Fiesta, MINI, Fabia and Polo, finishing a strong 38th in our Driver Power 2017 used car satisfaction survey. Exterior fit and finish was easily the highlight (10th), while safety, ride and handling also did well. But the Clio’s interior and overall practicality weren’t so highly rated.