It’s time for the Kangoo to get sexy! 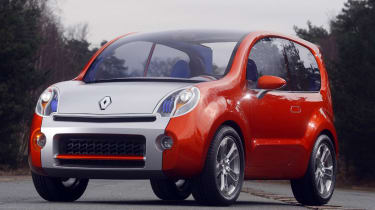 There’s much to like about the regular five-door Kangoo, but the Compact adds something it has been lacking – a dose of style and a real sense of fun to the package. If Renault can translate the show car’s looks, ingenious flexibility and agile driving experience into a three-door for the showroom, it will have a very desirable, and competitively priced, lifestyle MPV on its hands.

Since its launch in 1997, Renault’s van-derived people carrier has attracted plenty of buyers with its combination of practicality and flexibility. But it has always lacked one thing: desirability.

That is all set to change, though, with this – the Compact. Revealed at the Frankfurt Motor Show last Sept­ember, the model previews a new three-door Kangoo, which is due to go on sale next year. And it will add some much needed style to the Ren­ault’s already long list of virtues.

As you can see, the Compact has the potential to boost the image of the vans-with-windows market. This class has recently seen big changes, in the shape of Citroen’s new Berlingo Multispace and the Peugeot Partner, plus the latest Kangoo.

The whole idea of the Renault newcomer is that it’s eye-catching, fun and spacious – and it certainly scores on all three counts.

Outside, Fireball Orange paintwork, complete with contrasting brushed-aluminium panels, enhances the Kan­goo’s cheeky curves. In addition, there is lots of clever detailing, ranging from the 19-inch alloy wheels with their blue-tinged, transparent spokes to the wacky LED headlamps.

The Compact’s striking rear windows are expected to make production, and buyers could even get the option of the panoramic glass roof, too.

Shorter than the standard Kangoo, it’s a strict four-seater. The interior is finished in blue leather and grey mesh fabric, with orange detailing.

The tailgate has a lower panel which folds out to either 45 or 90 degrees. And as the newcomer was designed in partnership with skating firm Rollerblade, there’s even a pair of in-line skates thrown in as well.

Other changes see the ride height raised by 200mm to provide better ground clearance, while at the rear, the glass is cut away to create a lift-out section. The windows slide down and back electronically, giving a near-convertible experience.

Inside, an amazing view is offered, thanks to the high seating position, spacious cockpit and that enormous windscreen. The rear bench seat can swivel by up to 180 degrees, allowing passengers to get in or out via the back end. As with everything in the Compact, even though it looks a little science fiction, it’s all very practical.

Starting the 84bhp 1.5-litre dCi turbodiesel engine is also a bit out of the ordinary – you hit a big red button next to the steering column. Once fired up, the powerplant settles down to a smooth idle. Unfortunately, we weren’t able to put the car through its paces fully – it’s designed to sit on a motor show stand, and was limited to a top speed of 40mph. Still, the Renault certainly feels agile, and the diesel engine is responsive.

Given the front-wheel-drive Com­pact’s lifestyle MPV aspirations, the finished article should offer buyers a fun driving experience, with engaging handling and a comfortable ride.

The French manufacturer is targeting a young audience with this car, and is lining up a trendy name for the showroom model – rumoured to be Break’up. Yet irrespective of what it’s called, the idea of a sport utility version of the Kangoo is appealing, and this car has all the ingredients to be a hit for Renault. Prices could start as low as £9,000 when the three-door arrives in the UK in early 2009. And with two petrol engines on offer, in addition to the diesel in our car, the future for the Kangoo looks bright.