Renault has a lot riding on the success of the new Laguna. 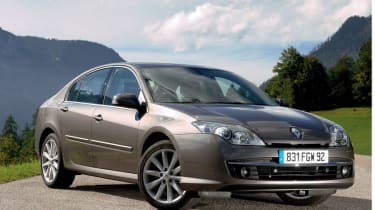 The all-new Laguna could be the answer to the prayers of drivers wanting a refined, comfortable and slightly less physically imposing alternative to the Mondeo. It can’t rival the Ford for driver entertainment, but it’s as well built, cheaper and in 1.5 dCi form offers a tax-friendly alternative. The biggest letdown is the new styling, which we don’t think moves it on sufficiently from the model it replaces.

For starters it has to take on Ford’s latest Mon­deo, which has raised the bar in the saloon car sector. The French firm is also pioneering Commit­ment 2009, its pledge to improve the quality of all future products for reliability and driveability. Plus the Laguna’s design, especially its nose, sets the tone for virtually all future models.

It certainly turns heads – but in our view the overly large headlamps give it too much of a hint of the soon-to-be replaced Citroen C5. The results are worse at the rear, where slab sides and a high bootline leave the car looking rather timid and weedy. Prospective owners planning to cause a sensation in the car park could be disappointed.

In fact, we reckon the best view of the latest Laguna is from inside, where Renault has spent a lot of time and energy raising the standard of build and materials.

The leather and Alcantara covered seats give a comfortable and supportive driving position, while the dash looks stylish and is functional. Cabin plastics are soft-touch, and even before you hit the road there’s a real sense of refinement and quality about the Laguna. However, the optional £750 satellite navigation system could do with fewer fiddly centre console-mounted buttons.

In the back, six-footers have sufficient knee and headroom to sit in relative comfort, but leg space is uncomfortably tight. The high rear end affects visibility out, too. Not only does it give a narrow tailgate window, but the steeply raked glass catches the reflection of the parcel shelf in direct sunlight.

Another area that Renault clearly hasn’t paid enough attention to is the gearshift. In the auto-only 2.0-litre turbo petrol, the lever feels disappointingly loose and cheap. But it’s not as much of a letdown as the manual on the 2.0-litre diesel driven here, which the firm estimates will make up half of all Laguna sales. The throw is long and the change woolly which is at odds with Renault’s claims that the newcomer will give ‘true driving pleasure’.

However, if your idea of a good time is being whisked around in a relaxed environment, the new Laguna hits the spot. Occupants are beautifully isolated from bumps. And on the smooth Austrian roads of our test drive, the ride was limo-like at speed.

Wind, road and engine noise are all brilliantly suppressed, making the Laguna a calm motorway cruiser. The only model in the range which suffers from slight engine noise is the 109bhp 1.5-litre diesel, but it’s hardly intrusive.

On A-roads the Laguna’s steering is well weighted and more responsive than expected – particularly in the diesel-engined variants – but devoid of feedback. There is plenty of body roll into corners but it’s controlled, giving an overall feeling that’s assured and refined rather than agile.

There are four trim levels: Expres­sion, Dynamique, Dynamique S and the top-spec Initiale, and currently five engines. The cheapest is the 138bhp 2.0-litre petrol, while there’s also a 168bhp 2.0-litre turbo. We tried the latter, too, and see little point in it, considering how good the diesels are. The 1.5-litre returns a claimed 53.3mpg and pumps out an impressive 139g/km of CO2, which will undoubtedly appeal to company car tax-paying drivers.

The 2.0-litre dCi unit comes in 128bhp and 148bhp forms, and there’s a new three-year or 100,000- mile warranty. The cover is hardly revolutionary, but it’s better than before – a bit like the car itself.

RIVAL: Ford Mondeo Our Car of the Year has blasted to the top of the saloon sector. It’s a brilliant package that offers crisp styling, a composed ride, involving handling, solid build quality and first-class refinement.