Does the new hi-tech Laguna turn over a new leaf for Renault? 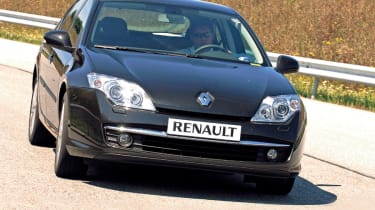 Renault has yet to confirm prices and specifications for the flagship Laguna GT, but its Active Drive chassis is impressive. The clever four-wheel-steering set-up improves the handling and reduces body roll, and the result is a much safer car. Expect it to feature on next year’s Laguna-based Coupé, although entry-level versions of the family model won’t get to feel the benefits, which is a disappointment.

Four-wheel steering sounds more relevant to rallying than road cars, but that hasn’t stopped Renault! When the new flagship Laguna GT hits UK dealers next year, it will feature the set-up as part of its Active Drive package, which is said to improve both handling and safety. But does it work?

At low speeds, the clever system is designed to boost manoeuvrability, so below 37mph the rear wheels turn in the opposite direction to those at the front. They can only rotate by 3.5 degrees, although that’s still enough to cut the standard Laguna’s turning circle from 12.05 metres to 10.80 metres.

It also means less steering lock is required. You need to turn the wheel through 16 degrees for every degree of steering angle in the ordinary car; to achieve the same result with Active Drive calls for only 13.5 degrees.

Above 37mph, the rear wheels are programmed to turn in the same direction as those at the front, to boost stability and road holding. At these speeds, the rear axle permits only two degrees of turn, while the maximum turn angle of 3.5 degrees is available only during emergency situations.

On the road, it feels like an ordinary car, but when driven back-to-back with the standard Laguna, the differences are obvious. Tight bends require less effort with the new system, and parking spaces will be easier to negotiate.

It’s at higher speeds that the set-up really impresses, though. There’s more feel than in the regular model, and the Active Drive chassis is extremely effective at controlling body roll.

The suspension is firmer than the standard Laguna’s, meaning capable cornering in high-speed bends. Yet it remains really supple. Quick direction changes are where the system provides the most obvious benefits.

Perform an emergency lane change in the standard model at motorway speeds, and aggressive steering inputs are required, with the ESP light blinking. As part of the Active Drive package, the stability system is reprogrammed with higher boundaries, so it doesn’t interrupt. Progress is calmer as a result; there’s no need to correct your steering – the Laguna goes where you point it.

So, it’s a pity four-wheel steering is only offered on the flagship. Buyers of other models won’t be able to tick an ‘Active Drive’ box on the options list – for the time being at least.

RIVAL: FORD MONDEO With or without its unique steering, the Laguna’s biggest rival will still be the Mondeo. The Ford has superb handling and agility given its size, and it looks more dramatic as well.