Our long term Laguns is causing Kim a few headaches. 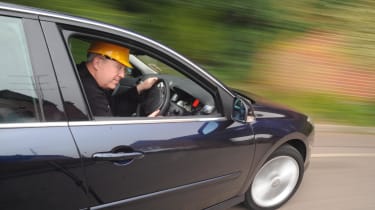 Renault has an enviable reputation for crash safety, but that hasn’t stopped me getting knocked about in my first few months with the new Laguna. It’s got so bad I’ve even tried wearing a builder’s hard hat for a little added protection!

The cause is a combination of my 6ft 3in frame, a high seat position and a simple sunglasses holder. Although the chairs are electrically adjustable, they don’t go down far enough, leaving my head perilously close to the top of the door – right at the spot Renault has put the sunglasses holder.

So when turning right on bumpy roads, the case smartly raps me on the bonce – which I have to say is pretty irritating!

At least it gets my attention, which would otherwise be easily distracted in a car that does so much for you. There are automatic lights and wipers, parking warnings front and rear, an auto-release handbrake, a built-in Bluetooth hands free phone, cruise control and a speed limiter. Plus it locks itself as you walk away with the remote key!

There’s even a little display telling you when to change gear. Add in a refined diesel engine and highly relaxed cruising and you have a car that is easy to get along with.

Our stint with the Laguna did not start so well, though. We had to visit a dealer twice in the first week when the stability control system warning light appeared.

The first dealer simply reset it and also failed to deal with the steering wheel, which sat at an angle when driving straight ahead. When the light reappeared again, we took it to Wests of Cambridge.

It hooked the car up to the electronic diagnostic system, and engineers at Renault HQ found the offset steering was confusing the stability control. Adjust the tracking and the problem disappeared.

Since then the car has really endeared itself, coping well with my 80-mile a day commute and returning 44mpg. The turbodiesel quickly gets up to the legal limit, but it needs working if you want to press on.

Yet this is not what the car is about. It excels as family transport, and I am looking forward to piling on the miles. I might just get that sunglasses case removed first though…