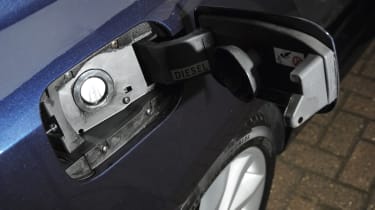 Our Laguna has just taken a trip to France – and it has never felt more at home! On the miles of deserted autoroute from Calais to Clermont-Ferrand, the Renault excelled.

We were heading for Michelin’s Ladoux test facility, where our long-termer was to be the support car for our annual tyre test (to be published later in the year), and the Laguna simply devoured the miles.

With the cruise control set at the 130kph (81mph) limit, the big hatch was relaxed and refined, so I arrived feeling fresh, despite spending around six hours behind the wheel.

The sat-nav proved faultless, too. I particularly like the junction display, which includes lifelike road signs. This proved essential on the crazy Paris Peripherique – as did the regular traffic jam alerts!

This kind of trip is what the Laguna does best, and it easily swallowed a week’s worth of luggage for two – as well as eight test tyres! Our high-speed cruise saw fuel consumption drop from 44mpg to around 42mpg, but that still means a range of around 500 miles.

While the Renault easily coped with two on board, it struggled with five when it was being used as a shuttle between the test track and hotel. Both front seats had to be moved forward to provide enough rear legroom. And it’s the front seats that cause the biggest problems. They can’t be lowered far enough and leave you feeling perched up high, rather than being sat snugly in them. And as mentioned in our previous report, I still bang my head on the sunglasses holder above my head every now and again. I’ve tried removing it, but it won’t budge.

Once you’ve accepted the flawed driving position, you won’t find much else to complain about in the Laguna. The 2.0-litre diesel isn’t the liveliest unit around, but is ideal for my 100-mile daily round trip to the Auto Express office.

It’s refined on the motorway, flexible around town and easy on the pocket, too. Since our early problem with an offset steering wheel, which triggered the stability control warning light and took two dealer visits to fix, our only problems have been self-inflicted. The windscreen is chipped, and we suffered a puncture after being forced into a rough-edged gutter. The Dunlop SP Sport tyre was replaced at a cost of £138.83.

Driving other cars highlights the Renault’s poor seats, but it also makes me appreciate other aspects. The auto wipers, lights, handbrake release and keyless entry make the Laguna so easy to live with. And the built-in Bluetooth set-up is brilliant – it even warns callers you’re driving when they ring.

The Renault is going back to France for a family holiday soon, and I’m looking forward to more fuss-free miles on the autoroute. Few cars can do the job better.

While Kim is won over by the Laguna’s long-distance refinement and gadget-laden interior, I still can’t get used to its styling. When rivals are as handsome as the Ford Mondeo, Citroen’s new C5 and the forthcoming Vauxhall Insignia, the Renault falls at the first hurdle. I’d have to plump for the more practical Sport Tourer, simply because it looks better than the hatch!