As unique as the Eiffel Tower, but as common as a Parisian café, the Renault Twingo is a French institution 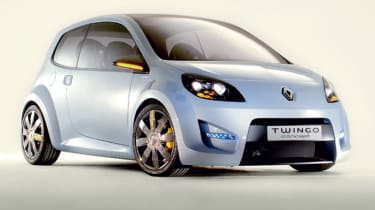 Creating a model that appeals to all kinds of buyers isn’t easy, but we reckon the new Twingo will be a genuinely desirable hatchback. It remains to be seen if underpinnings from the previous-generation Clio will provide sufficient dynamic abilities, but a broad range of engines should cater for all tastes. Brits have missed out on the Twingo for too long – we can’t wait to get our hands on Renault’s latest and potentially greatest city car.

Thje Twingo's cute looks and budget price made it a massive success on the Continent, but now a new version is in development which will cross the Channel and hit British roads for the first time.

Unveiled in September, the city slicker was one of the highlights of the recent Paris Motor Show. But will it take Britain by storm? Auto Express gained exclusive access to the newcomer to find out.

Having looked on in awe at the success of the MINI, Renault is aiming to pull a similar trick in the city car class. Offering premium quality in a small package, the Twingo is designed to bridge class barriers and appeal to all types of driver. And there’s no doubt that the firm has worked hard to get everything right. The city car was even sent back to the drawing board part way through its development as the original shape was judged to be too close in style to its predecessor’s.

Unlike any other model in the Renault line-up, the tiny hatchback has its own distinctive front end. The large, bug-like lights and gaping airdam will make it to the production car, while the 17-inch alloy wheels will be replaced by smaller rims on basic variants. At the rear, Renault’s trademark upright screen features, along with neat Clio 197-style exhaust pipes.

The Twingo will only be available as a three-door, and fits into the range between the Clio Campus – a cheap version of the old-shape supermini, which remains in production for the next two years – and the all-new Clio. Inside, designers have been given more of a free rein to shun practicality and pen a show-stopping cabin.

No fewer than three iPods are installed on the show car’s centre console, and these set the tone for vast areas of retro white plastic panels. Extras such as the built-in DJ mixing desk and enormous 15-inch TV screen will remain a fantasy, but don’t dismiss the MINI-inspired centrally mounted speedo – this will become a production reality. The sporty bucket seats will be replaced with more practical items, but both four and five-seat Twingo variants will be built.

While the concept is powered by a 1.4-litre petrol engine, buyers get the choice of three powerplants. Basic models have a 75bhp 1.2-litre unit, while a new 100bhp 1.2-litre turbo will debut. Already tested by Auto Express in the Zoé concept (Issue 851), the efficient motor returns 48mpg and emits less than 140g/km of CO2. The range is completed by Renault’s acclaimed 1.5-litre dCi diesel in three power outputs

As well as a five-speed manual, the Twingo will also be available with a two-pedal automated manual gearbox. This paddleshifter-equipped model will be ideal for stop-start urban traffic.

However, the Renault won’t get a cutting-edge chassis. It’s based on the previous-generation Clio’s platform, but will be developed to deliver a lively and entertaining driving experience.

At launch, there will be two trim levels – the plush Dynamique or warm-hatch GT. These will be joined by a hot Renaultsport performance model in the summer of 2008. This variant will use the 1.2-litre turbo­charged powerplant to deliver around 140bhp to the front wheels. During its production life, the Twingo will also be offered in unique special-edition trims, which will be designed with colour schemes to fit in with seasonal fashion trends.

Renault has yet to finalise prices, but entry-level models should start at around £7,000, rising to £9,000 for well equipped turbocharged variants. And just like the MINI, the Twingo will be available with an extensive options list, with most drivers expected to pay extra to make their car unique.

Set to go on sale in the UK next September, the newcomer will be unveiled in production form at the Geneva Motor Show in March. We’ll have to wait until then to see how much of the concept’s character has been retained, but if Renault keeps its promises, it could have another small car champion in its line-up.