After a 14-year wait, the Twingo is finally coming to the UK but unfortunately the GT flagship doesn't cut it against its rivals. 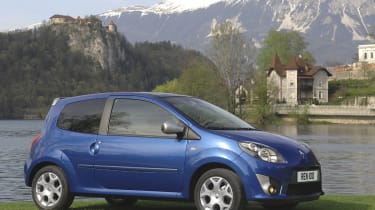 After a 14-year wait, the Twingo is finally coming to the UK. But in range-topping spec, it's a disappointment. The sporty GT flagship doesn't cut it against its rivals, thanks to its lacklustre handling and plain cabin. Let's hope the Renaultsport version due next summer will offer a more complete package.

Here's another new turbocharged model hitting the road this week - but it costs less than a tenth of the Porsche's price. We drove Renault's all-new Twingo in diesel form in Issue 965, and now we've put the firm's flagship GT to the test.

The sporty Twingo's styling features a contrasting silver rear spoiler, along with matching foglamp trims and door mirrors. In addition to these, smart 15-inch alloy wheels and dark tinted rear windows are further evidence that this model is aimed squarely at the likes of the Fiat Panda 100HP and Ford Sportka.

However, while these rivals rely on 1.4-litre and 1.6-litre powerplants respectively, the French newcomer has a 98bhp 1.2-litre turbo unit. Renault says it offers all the power and torque of a bigger engine, while maintaining the economy and low emissions of a smaller one.

On paper, the company is right, as 0-62mph takes 9.8 seconds, while fuel economy of 47.8mpg and CO2 emissions of 140g/km are impressive. On the road, Renault's argument is much less convincing, though, as the Twingo never really feels as fast as these figures suggest.

Turn on to more demanding routes, and the Twingo also fails to live up to its billing as a junior hot hatch. Despite stiffer suspension settings, there is too much body roll.

The precise steering and slick five-speed gearbox are fine, though, and the model's excellent visibility and versatile cabin mean that congested urban roads are its natural habitat.Rival: Fiat Panda 100HP

IF you can put up with its bone-jarring ride, the Fiat is an absolute riot. And thanks to a range of cosmetic tweaks, it looks the part, too. The £10,010 Panda also has a practical five-door body.