We drive the facelifted Renault Twingo, which gets sharper looks and improved cabin quality 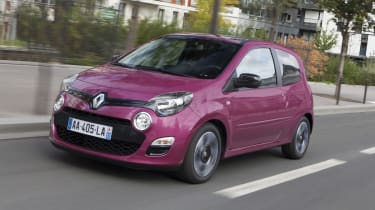 With a more distinctive look, the Twingo feels a lot fresher and better equipped to compete with newer city car rivals. It’s more stylish than before and even though the cabin hasn’t made many great leaps forward, at least it’s spacious. On the downside, the 1.2-litre engine needs revs and the ride is quite firm. But the biggest problem for the Twingo is that even in basic trim, it costs £1,000 more than the higher quality and more economical Volkswagen up!.

The Renault Twingo has always been a spacious and likeable city car – it simply hasn’t had the looks to attract style-conscious buyers and its cabin has trailed on quality. Now Renault has gone some way to answering those criticisms with this updated version, which costs from £8,995 and goes on sale in January.
It’s the first Renault to get a look heavily influenced by recent concepts such as the DeZir. The new grille stretches across the nose and incorporates a large Renault diamond badge, while bold headlamps and huge spotlights mean the Twingo has a lot more road presence.

Video: watch CarBuyer's video review of the Renault Twingo
[[{"type":"media","view_mode":"content_narrow","fid":"69349","attributes":{"alt":"","class":"media-image"}}]]
At the back, though, the tail-lights are split awkwardly across the tailgate itself. Renault has also tried to add further pizzazz with a couple of bright new colours: Bermuda Blue and the Fuchsia finish of our test car. There are 17 different wheel designs to choose from, too.
Renault has taken a leaf out of MINI’s book and now offers lots of personalisation options, with a choice of different decals for the roof and contrasting colours for the door mirrors and protective side mouldings.
With competition set to be fierce from the VW up! (and its sister cars, the Skoda Citigo and SEAT Mii), the Twingo needs all the help it can get, though. So what about inside? Well, the dashboard gets a darker, high-quality finish, there are new seat patterns, and extra colour coding for the controls and upholstery stitching. It’s just not as big a leap forward as the exterior.
That said, the four-seater cabin is quite spacious, with 50:50 split-fold rear seats and decent room in the back, even if the VW up! has more legroom thanks to a slightly longer wheelbase. It’s a shame the steering wheel doesn’t adjust for reach, as it compromises the driving position a little, though.
Around town the Twingo is nippy, and with lots of glass it’s easy to see out, making parking in tight gaps simple. The steering has good weighting and if you hustle the little Renault through bends you’ll be surprised at the level of grip and lack of body roll. But the ride is on the firm side.
Our test car had the entry-level 75bhp 1.2-litre four-cylinder engine which delivers peak torque of only 107Nm at 4,250rpm. That means you have to rev it hard to get anywhere quickly, at which point it becomes noisy. With only five gears to choose from, motorway cruising isn’t especially refined, either.
But while the little engine isn’t very punchy, it’s quite economical, returning 55mpg and emitting 119g/km of CO2. The latter ensures road tax is free in the first year. All in all, while the Twingo can’t match the class leaders, it’s far more appealing than before.
Share this on TwitterShare this on FacebookEmail