Can the Renault Twingo compete with the cream of the city car crop? 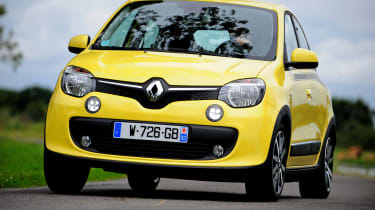 The new Renault Twingo is good-looking and impressively packaged little car. Its rear-engined chassis means its compact outside yet spacious and practical inside. On the whole it's good to drive – comfortable and manoeuvrable – but it’s lacking the fun factor of the very best this class has to offer.

Once in a while a car comes along that dares to do things a little differently- and the new Renault Twingo is one such car.

Unlike its rather predictable and uninspiring predecessor, the rear-engined, rear-wheel-drive newcomer is promising to shake up the city car market. That’s easier said than done, though, as the Twingo is going to have to take on the mightily impressive Skoda Citigo and hugely capable Hyundai i10.

Thankfully, the Twingo gets off to a good start. While it may share its chassis with the forthcoming Smart ForFour, the unique exterior design oozes with Gallic chic - it certainly managed to turn heads on our test drive in western France. 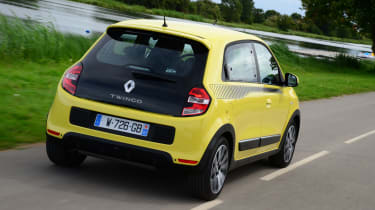 Personalisation options are all geared towards the fashion conscious and so of course you can mix and match various exterior and interior schemes. What's more, to help out Renault has handily put together six pre-chosen combinations which it thinks work well together. And at £200 a pop they’re pretty reasonably priced.

Our range-topping Dynamique TCe test car for instance, which starts at £11,695 and includes 15-inch alloys, body coloured door mirrors and fog lamps as standard, was graced with the 'Retro Racer' styling pack. This combines bright yellow paint with sporty black decals - though how long these stickers will look neat and tidy after a few years' worth of road grime and sunlight have taken their toll is anther matter.

The good news is that the interior seems more hard wearing. And despite the contrasting finishes and fancy design, Renault hasn't tried to do anything too clever with the layout of the controls or driving instruments: everything is very simple, intuitive and easy to use. 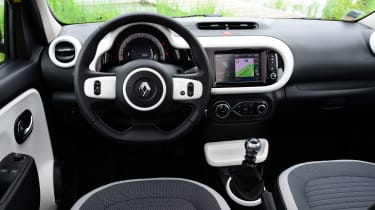 Our car was fitted with the tablet-style R-Link infotainment system which includes a seven-inch touchscreen, voice control, 3D surround sound, rear parking camera and TomTom navigation. It also lets you download apps from the R-Link store, such as email, Facebook and Twitter. You can view pictures and videos on the screen while the car is stationary, too. It's only available on the range-topping Dynamique car and is a £600 option.

For most buyers this will be an excessive extravagance as the standard R & GO set up lets you connect your phone to the car via Bluetooth and run CoPilot Navigation and other software for the Twingo through your handset anyway.

On paper its 188-litre boot trails all of its main rivals - even the Citroen C1 and Peugeot 108 have slightly more space, at 196 litres. But actually their boots are nowhere near as useable. Renault has mounted the Twingo's engine, which in the case of our car is a three-cylinder 900cc turbo, at an angle to keep it as low as possible to make the best use of space.

And with the boot floor the same height as the load lip it’s easy to slide items in and out of the car. You can actually lock the rear seats in an upright position to increase available space to 219 litres, though it won't be very comfy for those travelling in the back and it's still way off the VW up!'s 251-litre boot. 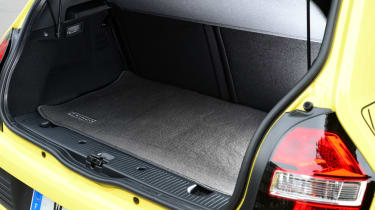 Fold the rear seats down flat though and the Twingo's taller body means total volume of 980 litres, which is second only to the Hyundai i10. However, the Renault trumps the Korean in another way - it is the only car in its class which has a fold down front passenger seat which means you can carry items of up to 2.3 meters in length inside the car - ideal if you need to carry flat-pack furniture.

There's also a raft of interior storage spaces dotted around the place too - including storage underneath the rear seats,  though bizarrely you only get rear door pockets with the flagship Dynamique trim.

Still, the overall rear-engine set up means that despite being 100mm shorter than the old Twingo, inside the cabin the new model is 220mm longer. This benefits rear legroom, which Renault says is best in class. Headroom is good, too.

All models get electric windows and only the entry Expression trim does without air-con and height adjustment on the driver's seat.

You actually sit quite high in the Twingo compared to its rivals and this really helps the visibility. This is perfect for manoeuvring in and out of tight parking spaces, as is the class-leading turning circle of just 8.59m. Once again you can thank the rear-engined set up for that as it enables the front wheels to turn through 45 degrees.

The range topping Turbo model we’re driving also adds to this variable rate steering which allows you turn the wheel fully from left to right in half a turn less than the lesser models. This variable rack is designed to make the car very manoeuvrable in tight turns yet stable a speeds. And on the motorway the little Twingo can hold its own - especially with the punchy three-cylinder 89bhp turbo petrol engine. It comes with stop start technology and returns an impressive 66mpg and emits just 99g/km of CO2. Still it isn't quite as good to use as Ford's 1.0-litre EcoBoost as there's a little bit of lag when you first pull away and it gets quite noisy when you rev it out. 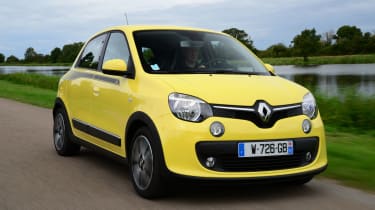 Thankfully, when cruising at speed it quietens down and there’s enough mid-range punch to power up hills and overtake. The only thing spoiling the experience is there's quite a bit of wind noise from the A-pillars. Despite this, for a city car, the Twingo is pretty good over long distances as the seats are comfy and the suspension supple enough to deal with jolts.

Perhaps the only thing that really lets the Twingo down is that it's not quite as memorable to drive as you'd hope. Yes it may have a rear-engine rear drive set up like a Porsche 911, but don't go thinking this makes it in anyway sporty because this little Renault lacks the fun factor of a VW up! or a Hyundai i10. It's just not eager, darty or as grippy as either rival. Get a little too enthusiastic on an open road and the front wheels soon start to wash wide. The high seating position nor that slightly unnatural variable rate steering don't help as they make you feel less connected to the road.

Obviously a city car's primary objective is for getting you around town as cheaply as possible, and the Twingo does this in quite some style. But the very best in this class do all that while putting a smile on your face. And it’s this key missing ingredient which means that while the Twingo is a very good car, it's not quite the truly great car we all hoped it would be.