We find out if the hybrid Renault Captur E-Tech can justify its price premium over that standard Captur. 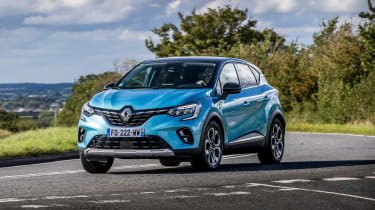 The Renault Captur remains one of the best cars in its class, but this plug-in hybrid version is hard to justify. Smooth and capable though it is, it’s much more expensive than regular petrol and diesel versions, while fully electric rivals like the Peugeot e-2008 and Hyundai Kona Electric make even more financial sense for company car drivers for similar money.

This is the new Renault Captur E-Tech Plug-in Hybrid, and it takes Renault down a different route to many plug-in rivals in the compact crossover class - rivals like the Peugeot e-2008 and Hyundai Kona Electric, which offer small SUV buyers a fully electric alternative.

Indeed the closest competitor for the Captur comes from Kia: the Niro PHEV has been around for some time, and delivers very similar on-paper stats.

With the exception of the battery, it shares much of its powertrain with the Clio Hybrid. The plug-in setup is also used in the Megane Sports Tourer. The combustion side of things is taken care of by a 1.6-litre petrol engine, but there are two electric motors. One drives the front wheels in EV mode and can offer up to 205Nm of torque. The second is a more compact unit, which operates as part of a starter/generator system, enabling the petrol engine to kick into life near-instantly when needed, and also to harvest brake energy to top up the battery.

The battery is a 9.8kWh unit, which allows for up to 30 miles of electric-only driving between charges. It seems an achievable figure - our car projected a range of almost exactly 30 miles when the battery wasn’t quite fully charged.

While the plug-in system is conventional, the gearbox isn’t. The clutchless unit drives the petrol engine with four gears and the electric motor with another two. But on the move, the Renault system works pretty effectively. In full EV mode, the electric motor has more than enough poke to make it perfectly usable without the petrol engine’s help, and will happily make it all the way up to an 84mph zero-emission top speed if needs be. 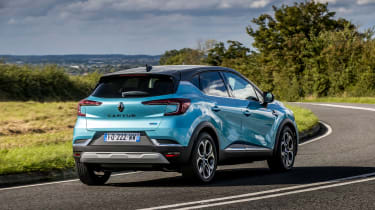 The car defaults to EV mode as there is enough charge in the battery. With the battery depleted, or if you knock the driving mode selector into Sport, the petrol engine will wake up. The 1.6 litre unit springs into life smoother than in the Niro PHEV, though curiously it’s not as seamless as the Clio Hybrid which, smaller battery aside, is pretty much identical in its layout.

Performance is adequate rather than remarkable. It’s sprightly enough around town, but approaching the national speed limit the acceleration tails off significantly. Some will find the Captur sluggish alongside the all electric Peugeot e-2008, or indeed the regular petrol and diesel Capturs. The Niro, meanwhile, feels a little slower in electric mode but more lively once on the move.

Some of that tardiness no doubt comes from the extra mass of those batteries, too. Tipping the scales at 1,564kg, the PHEV is over 237kg heavier than the diesel Captur, and almost 400kg heavier than the lightest petrol. While the rest of the Captur range has a knack of flowing along a twisty road while soaking up bumps along the way, the PHEV is a little more compromised. The ride, though still smoother than many crossover rivalst, is bouncier here than throughout the rest of the range. The steering remains precise and well-weighted though.

Little else separates the look of the Captur E-Tech from the rest of the range. Subtle badging aside, the only obvious change comes with an extra filler flap - the offside door hiding the charging port.

Inside, the Captur remains one of the best in class. The build quality is excellent, the design is smart, and the in-car tech is bang up to date. All hybrid models get the best tech the Captur range has to offer: that means a razor sharp 10-inch driver’s display and colourful 9.3-inch infotainment screen are standard. The rest of the cabin is similarly spacious as the rest of the range, though the 379-litre boot is slightly down on diesel (388 litres) and petrol models (404 litres).

Prices for the Captur Plug-in Hybrid start from £30,495, offered in the range-topping S Edition trim. The most powerful petrol automatic model in the same model line is a hefty £5,200 cheaper, which on the face of things, will make this car hard to justify for some buyers. 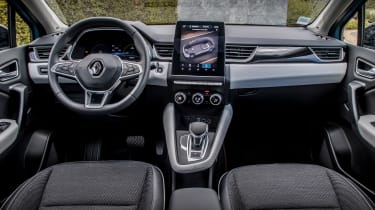 However, the E-Tech comes with some offers. First, Renault will offer a free home wallbox installation with every car - an £800 cost covered in itself, but one which will help buyers to keep their Captur fully topped up on electricity (a full charge takes three hours), maximising the potential to save on petrol bills.

But the Captur really makes sense most for company car users. With an official emissions rating of 34g/km, the plug-in falls into the 10 percent Benefit in Kind category. By contrast, the diesel and petrol models are rated at 27 percent and 31 percent respectively, which translates into a potential saving for the PHEV that more than cancels out the initial difference in purchase price.

There is another issue with that price, however. Due to government grants on fully electric vehicles, the Peugeot e-2008 starts from £29,065, and the Kona electric 39kWh from £30,150. Neither of those models are as well equipped as the Renault at those prices, but both are quicker, both offer a circa-200 mile real-world range and even lower Benefit in Kind ratings.