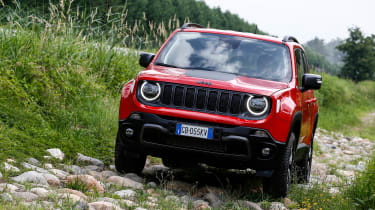 There's plenty of choice in the compact SUV segment, and with several of the Jeep's rivals already offering plug-in hybrid power this 4xe model does just about enough to compete. It’s expensive - you’ll be in a Kia Niro or Ford Kuga PHEV for a lot less, but neither of those cars can match the Jeep’s off-road ability. Plus, it comes loaded with kit.

The Jeep Renegade has quickly established itself as the golden child of the company’s range. It’s the firm’s best seller in Europe and has now been trusted with introducing plug-in hybrid technology to the line-up.

Called the Renegade 4xe (pronounced four-by-E), it launches in a number of specifications and with two power outputs. It’s priced at the upper end of its segment, above talented rivals like the Kia Niro and Ford Kuga PHEVS.

Styling changes are barely noticeable over petrol and diesel options, and the 4xe sticks with more or less the same trim structure as the rest of the line-up, save for special editions. Longitude models kick off the range from £32,600, but pricer Limited badged cars start from £34,500. It’s available in Trailhawk form too, with more power and additional off-road prowess.

The Renegade 4xe uses a 1.3-litre four-cylinder turbocharged petrol engine driving the front wheels, in tandem with an 11.4kWh battery pack and electric motor driving the rear axle. Longitude and Limited models use a 128bhp version of the petrol engine and a 59bhp electric motor, for a combined total of 187bhp. The Trailhawk version gets more power from its 1.3-litre engine, however, with a total power output of 237bhp.

More important are the fuel economy and CO2 figures claimed - the latter figure key for any company car drivers considering the new plug-in Jeep. Depending on your exact specification, Jeep claims between 122.8-134.5mpg, with CO2 ranging from 49-52g/km. 31 miles of electric running is claimed on a full battery. Recharging is handled at a maximum rate of 7.4kW for an 80 per cent recharge in an hour, and for business buyers it receives a 12 per cent benefit in kind rating. 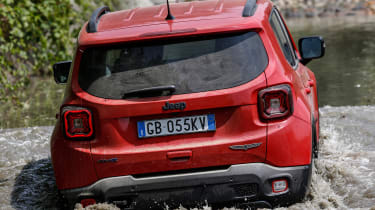 With a 97 per cent charge, our 187bhp Limited model claimed 29 miles of battery power in reserve. You can immediately opt for pure-electric drive through one of three powertrain modes found on a row of buttons next to the gear selector. Hybrid constantly shifts drive between petrol and electric, Electric keeps the Renegade running on battery power only, while E-Save preserves the state of charge and replenishes the cell on the move. Overall, we managed around 56mpg with little effort while flicking through the various modes.

The Renegade 4xe is keen to keep itself running on battery power as much as possible in Hybrid mode - so much so that almost half our 60 mile test run was completed on the electric motor only. However, the 1.3-litre four-cylinder engine is a weak point - it’s too loud and quite unrefined when it comes to life.

There’s also a new Sport drive mode too - but it’s not a button any prospective buyers will find much joy in pressing. The six-speed torque converter gearbox is slack and holds onto coarse revs too long, while dynamically, the Renegade has never been an entertaining SUV to drive. Jeep says 0-62mph in 7.5 seconds makes the 4xe the fastest model in the Renegade line-up (7.1 seconds in the Trailhawk version), but it’s an odd trait for a car in which body control, steering feel and grip in the corners isn’t a strength. 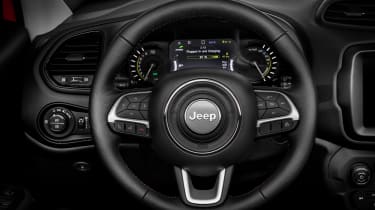 Ride quality is one of the stronger points. Even on the 18-inch wheels on our car, the Renegade 4xe’s comfort didn’t seem compromised by the additional weight of the hybrid drivetrain. It picks up movement and bumps in the road, but to its credit, it never really crashes over the worst of them.

On the motorway, the Renegade 4xe will happily cruise along in electric mode right up to its limited top electric speed of 81mph. However, the boxy and no-doubt appealing shape of the eye-catching Jeep isn’t best suited for a car of this nature. Headroom is excellent and so is visibility.

Leather upholstery is standard too, but the quality of the material on the seats and steering wheel clashes with some of the hard plastics on display around the otherwise spacious cabin. Few cars in the Renegade’s class offer up so much space, but the boot isn’t as capacious as the shape suggests and loses 20-litres of space due to the hybrid system, reduced to 321-litres. Many SUVs this size can fit more in the back.

One area the Renegade continues to excel in is off-road ability. The 4xe retains the regular car’s array of off-road drive modes and assists, with the rear axle still driven exclusively by electric power. Of similar sized SUVs, perhaps only a Range Rover Evoque will challenge the Jeep when it comes to the rough stuff.

However, most buyers of plug-in hybrid SUVs of this size will prioritise road manners over bona-fide off-road ability, leaving the Renegade 4xe as a niche choice in a market stock full of strong contenders for similar money or less.