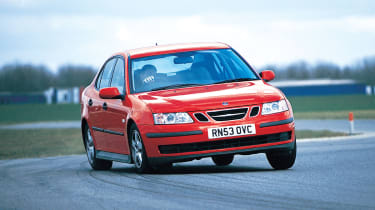 “While it can be pretty good in some parts and even excellent in a few areas, overall my Saab 9-3 doesn't quite make the grade.”

“Disappointed, it is apparently based on the old Vauxhall Vectra, and boy does it feel like it!”

“Good enough tool for the job.”

“Previously had a Vectra and it was much better specified and better fuel economy. I really thought the Saab would be a step up. Wrong.”

“It's a very very pleasant car to drive. Initially it was a little slow but with the Saab power upgrade it's become a joy with no fuel economy penalties for the additional 30% power that is noticeable. It has never let me down in two years of commuter motoring and a few motoring holidays and the only problem I have had with it that the internal heater fan mounting broke and could not be switched on in recirc mode. This was fixed under warranty.”

“Supremely comfortable and supportive seats. Even though the car is aimed at junior execs, it is quite practical for families too with a good sized boot and folding rear seats. A few rattles but nothing too intrusive. Outstanding value for money compared to other junior execs. Would benefit from a more powerful diesel, however.”

Despite its tiny model range and lack of innovative design in recent years, Saab can still rely on the support of its loyal customer base. However, with a three-place drop down the chart, are fans of the Swedish firm getting fed-up? Iffy reliability is matched by mid-table finishes in most other ranks. Only the outstanding comfort of Saab's models has saved it from embarrassment.