Drop the hood, don the sunglasses... and cover your ears. That's what drivers might expect to do in a diesel convertible 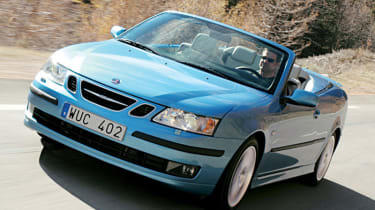 The addition of a diesel powerplant to Saab's handsome and practical Convertible line-up is a welcome one. The four- cylinder turbo petrol versions are still more refined, but fleet users and high-milers will appreciate the TiD's much lower company car tax penalties and superior economy. Just steer clear of the auto.

Drop the hood, don the sunglasses... and cover your ears. That's what drivers might expect to do in a diesel convertible, but more manufacturers are now producing oil-burning cabrios.

Nearly 40 per cent of Audi A4 soft-tops sold last year were TDIs, and the prestige four-seater diesel cabrio ranks are about to swell further with the arrival of Saab's 9-3 Convertible TiD.

The petrol version is already a top- seller in the premium sector, and the Swedish firm expects the TiD to account for 20 per cent of the 6,500 soft-top sales it predicts for 2006.

Like its saloon brother, the newcomer features a 1.9-litre common-rail turbo-diesel developed with Fiat. With outputs of 148bhp and 319Nm of torque at 2,000rpm, it is a good rival for the 2.0-litre engines in BMW's 3-Series and the Audi A4 - but it also has to take on the forthcoming 180bhp Volvo C70 D5.

On the roads of Verona in northern Italy, however, the 1.9 TiD never quite seemed to deliver the kind of in-gear thrust you'd expect from a modern turbodiesel. The chief culprit was the £1,200 optional six-speed automatic gearbox fitted to our test car. It is competent - in manual mode, it even lets you hold the needle at the rev limiter between changes - but the self-shifter seems to drain much of the urge out of the engine. In contrast, the manual variant is significantly faster, taking 10.4 seconds to sprint from 0-62mph, rather than the auto's 11.8 seconds, while the combined fuel economy rises from 38mpg to nearly 45mpg.

With a three-pedal transmission, the TiD makes a fine cruising companion. The engine is comparatively subdued at idle and near-silent on the move, although there is some vibration through the pedals under hard acceleration. And even without a solid roof, the 9-3 is no slouch in corners. The light, accurate steering and taut, front-wheel-drive chassis create a real sense of agility. Meanwhile, for buyers who prefer the smooth charm of an even more powerful Convertible, Saab has added a new V6 petrol engine to the 9-3 cabrio line-up. The turbocharged 2.8-litre V6 Aero produces 250bhp, and even the automatic gearbox can't dampen its enthusiasm for speed.

All models feature a nifty, triple-layer, folding canvas roof which provides a snug atmosphere entirely in keeping with the stylish and distinctive cabin. It's the manual TiD which is the pick of the range, though - anyone looking for a fast, frugal executive drop-top would do well to take a look.