Huge MPV is set to be a big hit 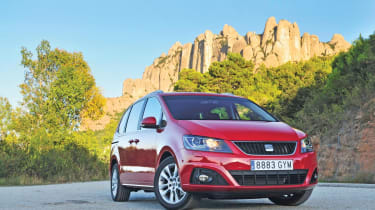 The Alhambra deserves to be a sales success for SEAT. It offers fantastic practicality and versatility combined with a refined ride, competent handling and a range of frugal engines. It’s certainly not cheap, but you do get plenty of space for your money. It’s a very impressive MPV with lots of appeal for large families.

Meet the seven-seater that’s set to inject some Mediterranean style into the MPV market – the all-new SEAT Alhambra.

Based on the same platform as the Volkswagen Sharan, but with the Spanish firm’s family face and some rear styling tweaks, the new Alhambra is longer, wider and lighter than the old model. In fact – along with the VW – the SEAT will be the widest MPV on the market when it arrives in November, plus have the longest wheelbase and biggest boot.

As you might expect, it’s incredibly spacious. Adults will be comfortable in any of the rows, and even in seven-seater mode there’s space for luggage.

The passenger seats have been designed to fold flat easily with one hand, and with the back row down, boot size increases to 885 litres, extending to a maximum of 2,430 litres – 105 litres more than the Ford Galaxy.

Access is easy, thanks to the electric sliding doors, which can be opened and closed with a push of a button. Plus the large windows and panoramic sunroof makefor a light and airy interior.

The driving position feels car-like, and the Alhambra is simple to drive, despite its size. It offers a quiet, comfortable ride, too. Engines will include a 148bhp 1.4 TSI petrol and a 2.0-litre TDI diesel with 138bhp or 168bhp. All come with stop-start.

We drove the more powerful diesel as well as the petrol option and both provided smooth performance with plenty of torque. Emissions figures are decent, too – the less powerful diesel unit manages 143g/km, with the petrol at 167g/km.

SEAT will offer the Alhambra in S, SE and SE Lux trims, with prices from around £21,000.