For the third year in a row, the SEAT Alhambra wins the Auto Express Best MPV award 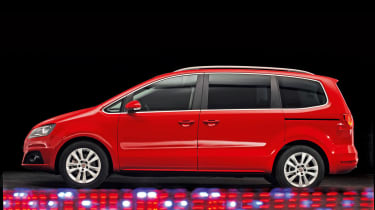 Big is beautiful with full-size MPVs, and the SEAT Alhambra’s interior is just that. With lots of legroom, flexible seating and a decent boot, the SEAT takes some beating – this is the third year running it has won the award.

What makes the boxy people mover such an unbeatable proposition? Well, it’s not the most stylish MPV around, but if you rank practicality above all else, look no further.

It’s also great value, as it undercuts the near identical VW Sharan’s price and comes with the same excellent engines and interior.

With cars this big, sliding rear doors are a must, and the SEAT duly obliges, unlike its Ford Galaxy and S-MAX rivals. The doors make it easy for your family to climb in and out, even in tight car parking spaces, and all Alhambras come with standard parking sensors.

If you think this sounds too sensible, don’t be put off. The Alhambra drives remarkably well, so you won’t feel like a bus driver at the wheel. Its tall body and raised driving position give you a great view of the road, taking the stress out of tricky urban commutes and long motorway drives.

In short, if you’re buying an MPV, don’t put pen to paper until you’ve tried the SEAT – chances are, it’ll fit the bill perfectly.

OUR CHOICE: 2.0 TDI SE 140 (£26,915)All engines in the Alhambra range are impressive, but the efficient 2.0-litre TDI 140 diesel is the pick of the bunch. When it comes to value for money, mid-range SE specification is the one to go for – it gives you everything you need and nothing you don’t.

Better to drive and more stylish than the SEAT, but not as practical. The Ford is the class leader for driver appeal, but a lack of sliding rear doors hinders you in tight spaces, while the third row of seats is a little cramped compared to the SEAT.

Few car makers can claim to have invented an entire class, but Renault  has been an MPV pioneer for over three decades. The Renault Grand Scenic is smart, practical and good to drive. We think it’s the best compact seven-seater around.