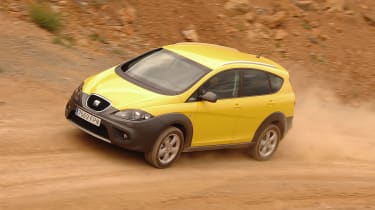 Poor visibility aside, it's difficult to fault the Altea Freetrack technically. It's safe, roomy, economical, soundly built and well equipped. It's good to drive on the road and it can deal with forest tracks. But what it clearly lacks is the styling and image of more conventional off-roaders such as Land Rover's Freelander. Some customers may not find SEAT's crossover approach such an exciting prospect. Yet the company should still find homes for the 600 Freetracks it plans to sell in the UK.

Is it an MPV? Is it an off-roader? Ac-cording to SEAT, the new Altea Free-track is not so easily pigeonholed.

Essentially, it's a 4x4 compact MPV, much like Renault's old Scenic RX4. Based on the long-wheelbase Altea XL, it sits high on revised suspension which is a full 40mm taller than standard, giving it a tough off-road stance.

In the metal, the car certainly turns heads. Buyers will have to choose the colour of their Freetrack carefully, though. It doesn't look that great in bright hues, including yellow. The imposing front and rear bumper kit contrasts strongly with the body paint, making the car appear as if it's wearing temporary protective moulding. Much more subdued hues, such as a silver or green, will suit it far better.

As with the Honda CR-V SUV, the Freetrack uses an automatically regulated four-wheel-drive system, which cannot be controlled manually. In normal conditions, drive is directed entirely to the front wheels, and there is no additional low-ratio gearbox. Clearly, the Freetrack isn't designed for hardcore off-road work, yet it copes easily with rough gravel tracks, as we found out on our test route.

With its car-derived suspension, the Altea is designed primarily for road driving, which is something it does well. There's plenty of grip and very little body lean in corners. The steering is weighty, precise and accurate, although it is a little lacking in feel. And the ride, on the diesel version at least, is pretty firm over town potholes, although it soaks up country roads well enough.

Buyers will have a choice of two engines, both equipped with six-speed manual gearboxes. The 2.0-litre petrol model comes with the same 198bhp turbocharged FSI engine found in the hot Leon and Altea FRs. It's expected to cost around £20,000.

We tested the diesel car, which uses the 168bhp 2.0-litre turbocharged oil-burner from the Leon 170 FR hot hatch. It will cost about £21,000 when it arrives in October.

Performance through the gears is reasonably swift, as it sprints from 0-62mph in 8.7 seconds. But the quick revving engine has an almost abrupt nature to its power delivery, which combined with the need to change gears rapidly through the six-speed box, can lead to a less than relaxing driving experience.

Despite its raised ride height, overall the Freetrack feels genuinely sporting to drive, even with a diesel engine. The only thing that mars the enjoyment is the serious restriction placed on visibility by the exceptionally wide front A-pillars. You need to be careful, because in tight corners and on roundabouts, it's all too easy to lose sight of other cars.

Apart from the pedals being slightly offset to the right, the cabin is fine, with plenty of stowage space - particularly with bins mounted in the headlining. Build quality is excellent and the front seats are comfortable. Even the two-tone brown and black dash begins to grow on you.

There's plenty of leg and headroom for passengers sitting on the sliding back seats. Boot space is generous, too, and offers the same 532 litres as the normal Altea XL.

However, the secondary cargo area underneath the boot floor - which holds a space-saver spare wheel - is smaller due to the four-wheel-drive conversion. There's only one trim level, which provides dual-zone air-con, rear parking sensors and rain sensor wipers. Also fitted as standard is a rear fold-down seven-inch screen for use with a DVD-player, laptop or iPod, while a five-star Euro NCAP crash test rating provides peace of mind.

But is the Freetrack really so difficult to describe? We don't think so. As a soft-roader, it lacks some of the visual aggression of its rivals, but for those who want the versatility of a 4x4 without the negative image such cars increasingly attract, the SEAT is well worth considering.