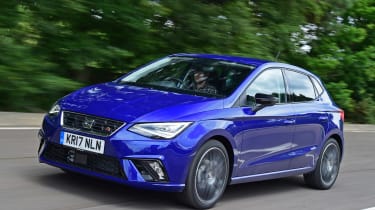 Although the latest SEAT Ibiza is a fraction (2mm) shorter than the old model, the MQB A0 platform means the wheelbase has extended by 95mm, so there's much more space inside – SEAT says rear legroom is improved by 35mm, while the square-shaped boot is especially spacious at 355 litres.

More importantly the car has got much wider – by 85mm – and it sits ever-so-slightly lower, giving it a sportier look on the road. That’s accentuated by the sharp creases along the sides, the narrow front lights with LED daytime running lights and more creases running down the bonnet. This is a seriously good-looking supermini.

The good looks continue inside with more sharp lines around the dash and plenty of shoulder and headroom in the front and back. A six foot passenger can just about sit behind a six foot driver in reasonable comfort, but there’ll be plenty of room for three children across the back bench. 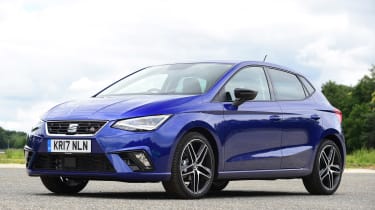 In spite of the sharp lines across the dash, the cabin isn't as adventurous as the outside, but it’s dominated by a touchscreen system for the infotainment. Most buyers will opt for SE Technology trim and above, so will get an 8-inch screen with navigation – but Apple CarPlay and Android Auto are standard across the range.

Heating and ventilation controls are separate and sit below the touchscreen, while the instrument binnacle features two large clear dials and a screen in between that can show navigation, audio or vehicle information.

Slightly disappointing inside is the quality of the plastic on the dash and door tops. It looks fine, and feels okay when you first touch it. But prod it and you’ll realise it’s hard – the similar Polo gets a classier soft-touch dash top. Still, for us the interior is good enough and that wouldn’t stop us recommending it.

Every Ibiza we tested at the car’s launch came fitted with a Beats audio upgrade (now a £485 option), giving a seven-speaker 300W sound system that can be connected via USB or Bluetooth. It offers impressive sound quality for the supermini sector, and we'd tick the option box for the good spread of detailed sound and punchy bass. 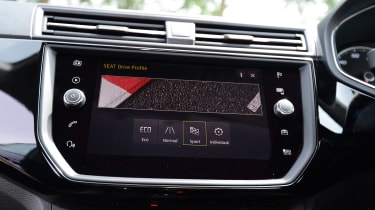 The entry-level SE model gets a six-and-a-half-inch colour touchscreen, while all other trims have an eight-inch screen. It’s similar to those in other VW group cars, with menus popping up as your hand is sensed near the screen – although the compact dimensions of the Ibiza and close proximity of the gear lever mean these can pop up when you're shifting. The screen features clear and simple to follow menus, while the navigation that’s standard on SE Technology models and above features pinch and expand functionality on the screen. There are two knobs either side of the glass for controlling volume and station search, while heating and ventilation controls sit underneath the screen so you don’t have to wade through menus to change the temperature.